Getting to Know Matthew Swajkowski 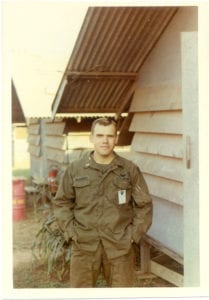 Matthew Swajkowski on deployment during the Vietnam War

It is with great sadness that we share the passing of Matthew Swajkowski. Matthew Joseph Swajkowski, age 73, of Union, New Jersey passed away Friday, June 19, 2020. Matthew was born April 3, 1947 in Newark, NJ.

I was born and raised in Newark, New Jersey, specifically in the Ironbound section which was also called “Down Neck”.  I was nineteen years old and in college when my parents moved to Union, New Jersey.  I have lived there ever since, and have been married the last 43 years.

I was well aware of the fact that I would have to fulfill my military obligation, especially with the buildup in Vietnam in 1965.  I enrolled in R.O.T.C. at Saint Peter’s College using the program’s special deferment to stay in college and obtain a commission. 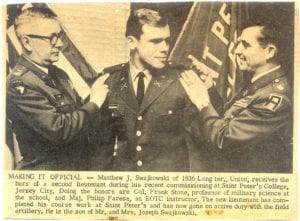 Matthew Swajkowski during his commissioning at Saint Peter’s College

During the first two months I was a Forward Observer attached to an Infantry Company providing them with immediate on call artillery support when necessary.  At the end of the 2nd month I was wounded, which allowed me a brief period of convalescence at the main base.

I readily expected to be sent back out with my company when the opportunity to fly aerial reconnaissance came.  Given a chance to leave the field, I volunteered and began flying as an Aerial Observer for the next eight months.  My last two months were spent helping to transfer over fire bases to the Vietnamese Military usually running convoys up and down Highway 1.

As a forward observer with the infantry I participated in combat assaults, jungle reconnaissance, and sweeps — basically doing everything the infantry company was assigned to do during their time in the field.  Eating C-Rations, suffering through poor hygiene, dealing with mosquitoes, leeches, and snakes — so when the opportunity to fly Recon was offered, I readily took the job.

As an Aerial Observer I performed reconnaissance for the Division, supported ground units by directing artillery fire for them, and regularly engaged targets of opportunity when we discovered them.  Normally we flew 6 hours a day, usually scheduled at different hours so that we always had people airborne.  It was very routine, usually a briefing in the morning, occasionally two, then the actual flying, followed by a debriefing at the end of the day.

During my last two months, as the division slowly turned over various fire bases to the South Vietnamese Army, I helped by overseeing convoys removing our equipment.  There were few incidents on Route 1 so it was relatively safe.

Besides the friends I made with the observers in our group, I also made several friendships with the pilots that flew us around.

More importantly, I feel that there are many individuals going about the business of their lives now due to my efforts as an air observer with my pilots risking ourselves every day, flying top cover, engaging the enemy thereby reversing some tenuous situations.  We also found many targets of opportunity which we eliminated thereby reducing the enemy’s operational ability. 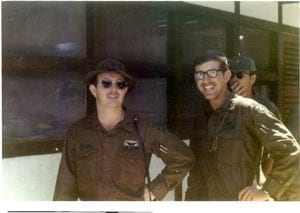 My favorite individual was an OH-6 (observation helicopter) pilot, Captain Ron Cellars.  Ron was probably the only person I ever met that could locate himself faster than me.  If we located a target while at low level I would require Ron to get some altitude so that I could merge the target, the terrain, and the topographic picture on the map in order to get a grid that I could convey to the firing battery.  However, the moment we found it Ron would point to my map and say “it’s right here”.  Sure enough, he was usually almost right on!  It always amazed me.

Additionally, Ron was one of he most skilled pilots that I flew with, performing maneuvers many others would be leery at attempting.  I am not taking away from many other skilled Scout Pilots and Bird-dog pilots that put up with me, but Ron will always stand out.

The American Serviceman performed honorably and with dignity in spite of what was reported about him.  Even in the sixties and seventies reporting was biased and designed to sway opinion.  The soldiers deployed over the span of years in Vietnam are not the ones responsible for the failed effort.

Although I was never confronted or hassled, I recognized a mood of complete indifference towards returning Veterans.  The only welcome I received was from my family and our immediate neighbors.  The Township’s VFW post told me I didn’t qualify because Vietnam was not a “declared war”.  I was walked to the door and told to leave.  The American Legion wasn’t far behind in giving us grief. 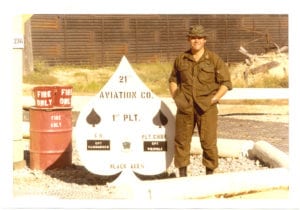 Entry level positions that I was qualified for never materialized.  I sent out several dozen applications with resumes across northern New Jersey.  I was offered a few jobs that had no connection with my area of study.  After several months I applied to and was accepted to graduate school.  I was there for two years getting a master’s degree and teaching certification.

I went on to teach High School science.

I retired from teaching in June of 2011.  Later that fall, I began volunteering at the Memorial.

My hope was that I could convey the truth to people I spoke with, hoping to clear up misconceptions that were handed down over the decades.