Getting to Know Joe Leone 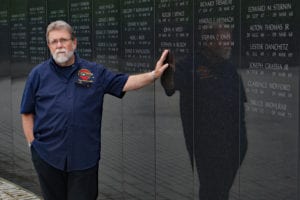 This is a series of spotlights on our Vietnam Veteran Tour Guides. These men are invaluable connections to the history of the Vietnam Era as they share their personal stories with our visitors. Guided tours of our site are available Tuesday-Saturday.

Joe Leone of Mercerville, New Jersey, is an Air Force veteran who served two tours in Vietnam in various roles as an Administrative Specialist. His last assignment was with the 4th Tactical Fighter Squadron at DaNang AB.

I was born in Hoboken, New Jersey, and moved to Keansburg when I was 10. It was pretty much a normal small town at the time, before all the tumult of the ’60s hit.

I went to Christian Brothers Academy in Lincroft, New Jersey, for high school and didn’t have the money to go to college after. I thought the Air Force was a good decision at the time. I never received a draft card since I joined at age 17.

My first tour was April 1969 to November 1970.  I served six months at Nha Trang AB, then six months at Cam Ranh Bay AB. After extending my tour 6 months I went to Tuy Hoa AB. In July of 1971, I went back to Vietnam to DaNang AB and was the Chief Clerk for the 4th Tactical Fighter Squadron. 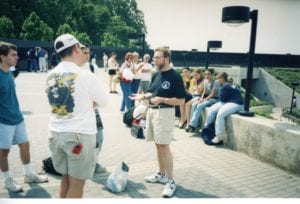 Joe is one of our longest tenured volunteers (school tour, 2007)

I was an Administrative Specialist. At Nha Trang I worked for the 1st Sergeant and Commander in the Orderly Room. At Cam Ranh Bay I worked in the Personnel Office. In Tuy Hoa I was the R&R (rest and recuperation) Clerk. I arranged the R&R’s for the personnel for the base.

In DaNang we worked six days a week, 12 hours a day.  I did reports for the Commander along with any tasks he had for me. I was responsible for the mail and taking care of the pilots’ administrative needs.

If there was a favorite memory, I guess getting to see the Bob Hope Show in DaNang in December 1971, and being able to teach Vietnamese children English at a Baptist Mission in DaNang. It was a nice relief from the knowledge of the loss of the lives of the four pilots we lost and the fear of rockets.

I met some friends and also had the opportunity to get to know the Vietnamese people. The most admired person was Lieutenant Colonel Paul Craw, the Commander of the 4th TFS in DaNang.  He served two tours and was one of the bravest men I have known.

Each of us did a different job and had a different experience. It’s important to talk to different Veterans and get their stories which must be told. This is why the experience of coming to the NJ Memorial to listen to the volunteers is a valuable experience.

Coming home was a rude awakening. We weren’t welcomed; we were cursed at and demeaned. I thought I would get a good job since I was a Veteran, but I quickly learned that I would have to take this task in my own hands. I enrolled in Brookdale Community College and studied Respiratory Therapy. 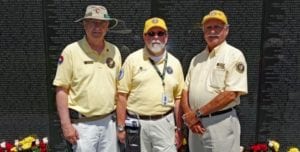 As well as volunteering at the NJVVMF, Joe volunteers alongside our other “Jersey Boys” Michael McMahon and Michael Coale at the Vietnam Veterans Memorial in DC

I became a Registered Respiratory Therapist and Neonatal/Pediatric Therapist and have been doing this career for the last 46 years.

I wanted to be a part of this Memorial and tell the story of the men and woman on our Wall so that they will never be forgotten.