Getting to Know Joe Rosato 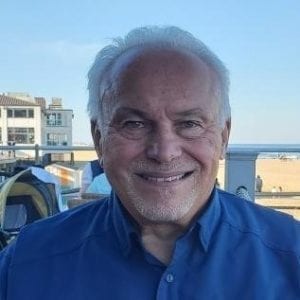 Years Served in the Military: 4 years

I was born and raised in the Gravesend section of Brooklyn, New York.

While growing up in a crowed neighborhood filled with baby boomers, I can safely say that everyone looked after each other. The entire neighborhood practiced strong family ties with grandparents, aunts, uncles, and cousins all living next door or within a few blocks of each other.

I spent most of my time either working or playing in the streets and the nearby beaches of Coney Island. I began to work after school at the age of 11 without working papers, and continued to be employed there until I graduated high school in 1965.

The buildup for the war began just as I graduated from high school in 1965 and I didn’t want to be drafted. I had a teacher who was a World War II submarine Veteran who convinced me that joining the Navy was the way to go. I just so happened to join the Navy on the 25th anniversary of Pearl Harbor, December 7, 1966.

By 1968 I served on-board the aircraft carrier USS America CVA-66, which began her bombing missions from the Gulf of Tonkin. The Navy labelled the location as “Yankee Station” for all naval vessels operating off the coast of North Vietnam. 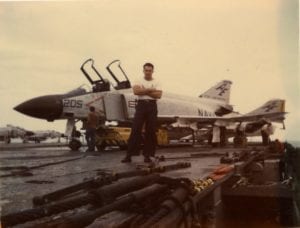 Joe Rosato on deployment during the Vietnam War

I began my Navy enlistment in the submarine service as an Electrician’s mate. After being transferred to the regular Navy at the very beginning of The Tet Offensive in 1968, I became a Boatswain’s mate. Boatswain’s mates train, direct, and supervise personnel in ship’s maintenance duties. While traveling to The Gulf of Tonkin from Norfolk, Virginia, I qualified as a Helmsmen and set out to drive the largest vessel in the world to war.

I remember the days being long and very hot and humid. For the most part my day began at midnight on the ships bridge, where I had a 4 hour watch that ended at 4 a.m. It was called the mid-watch, allowing me to sleep an extra hour until 7 a.m.

By 7:30 a.m. each day I had to report for duty as a Boatswain’s mate and perform my normal duties of assisting in replenishment of ammunition, fuel, and supplies. At best the average workday was an exhausting 16 hours with temperatures of 100 degrees.

My favorite memory took place on our way home from the Gulf of Tonkin to Norfolk. I was handpicked and very proud to assist in mooring the ship in place right in the center of the Sydney Australia Harbor opposite the famous Sydney Opera House.

That day happened to be very windy and the water was rough. I was in a 16 ft. long whaleboat with 5 other sailors who had to place a 250 lb. cotter pin into a 500 lb. shackle. The small whaleboat was fiercely bouncing up and down and the wind kept trying to push us out to sea. After many unsuccessful tries, we were unable to place the pin into the tightly engineered hole and accidentally dropped it into Sydney Bay with no way to retrieve it. 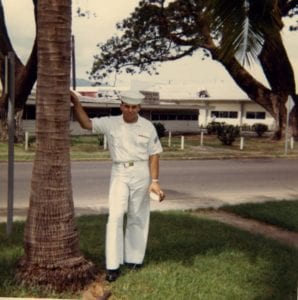 Joe Rosato in uniform during the Vietnam War

There was no pier big enough to tie up to which caused much anguish to the 6 off us who were in the whaleboat. It took a while to improvise a solution with a steel cable being lowered to us in the whaleboat which was wrapped around the shackle and used to fill in as a cotter pin. Each of us had to send separate four hour radio watches in the whaleboat around the clock and report the ships positioning every 15 minutes until the ship departed three days later.

While returning to the ship from liberty call in Sydney, I ran into singer/performer Pat Boone who was appearing locally in concert and visited the ship. We had a 20-minute conversation about the war, the ship, and his patriotic view of America. His words of saying goodbye still echo in my memory. He said, “Your service will never be forgotten and may God Bless you and the entire crew of this wonderful ship for doing what you did.”

Serving in the military during the Vietnam War was not easy and it required great sacrifice by all who served. For most of us it was giving up family life and saying goodbye to our loved ones in exchange for complete control of who we really were and what we did. Being forced to go to a faraway place that most people never heard of to fight and not know if you will ever return doesn’t leave your consciousness easily.

Arriving at the old Newark Airport just a few days before Christmas 1968 is a day I will never forget. The flight originated from Norfolk and it had a 100% military passenger count. When the ground crew wheeled the stairwell to the planes exit door, we were told that there were many antiwar demonstrators in the narrow passageway to the main terminal. That heads up made me wonder why demonstrators were protesting us since all we wanted was to go home to our families. We all finally made our way through the mayhem while being spit upon, cursed at and called “baby killers.” 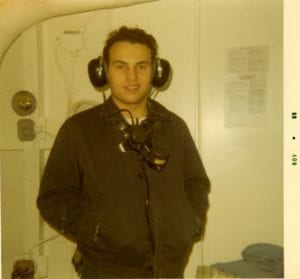 Joe Rosato on deployment during the Vietnam War

I retired in 2008 and began looking for something to do with my spare time. One day I finally got the courage to visit the Memorial for the first time and personally witnessed a school tour in progress with Veteran tour guides. I followed a tour and when it was finished, I thought to myself, “this just might be what I was looking for.” Giving back to the youth of New Jersey gave me a warm feeling and here we are 14 years later.