Getting to Know Jim McGinnis 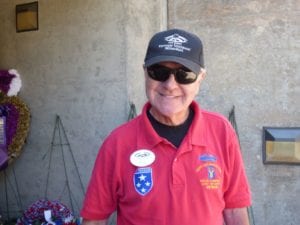 Years Served in the Military: 2 years

I grew up in Union City, New Jersey, which was originally named West Hoboken due to its proximity to the town of Hoboken. It was traditionally considered a blue collar town. As kids, we played mostly in the streets, or if we found a lot we would play our games there. We would be outside all day and come home when it got dark outside. We had no basic playgrounds so we did the best with what we had.

I was drafted into the Military at the age of 20. I was attending night college at Rutgers University, however I was not taking enough credits to be deferred from the draft, so I took my chances.

My unit, the 196th Light Infantry Brigade, sailed in two ships from Boston Harbor in July 1966 and were LCI’s (deployed landing craft infantry) in the South China Sea at Vung Tau. Then we were transported by aircraft to Tay Ninh Province in III corps approximately 30 miles from the Cambodian border. We operated for nine months in III corps and were transported after that to I corps to Chu Lai to relieve the Marines so they could go further inland. 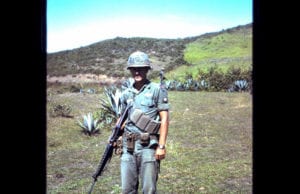 I was part of the Delta Company 3rd Battalion 21st Infantry Regiment Recon Platoon. My designation was a “senior scout observer.” Our Platoon Sergeant was Mark Hollingsead, and he was very proud of his recon troops, we were named “Holly’s Raiders” and on occasion we wore black berets. We were the “eyes and ears of the Battalion” on a mission.

We would be transported by Huey for a mission,  “jump off the Hueys,” and perform a daytime “search and destroy” mission. On occasion we would stay out for the very dangerous “night ambush patrol,” where we  would set up to attempt to ambush the enemy, who was very elusive.

Before I was deployed, my friend, Dennis gave to me a small diary. I asked what it was for, and Dennis told me that during World War II, soldiers kept diaries and recorded each day their experiences. I asked Dennis, “what if  I don’t survive my tour,” and he told me to put his name on the very first page, and perhaps if I did not survive, he might be given the diary up to that date anyway. Well, through the grace of god and a lot of luck, I was able to record my full year and return home. Years later, I researched that diary and added up all the experiences I had in Vietnam. When I added up all the night ambush patrols I participated in, I learned it was 62, which is 18% of my year in combat.

We also provided security for artillery fire bases, and on occasion would guard a specific bridge of Highway 1 in I corps to keep the enemy from destroying the bridge.

We were on a forward helicopter base of the First Infantry Division. The “big red one,” after operation Attleboro in November 1966, and were on a daytime patrol. The platoon was taking a break and sergeant Petrin decided to have me and another trooper take a break in the middle of a field with the sun blaring down, while the rest of the platoon were in the shade of the jungle, which i could never figure out why. Well, along a trail nearby came a farmer, who I will call “Papasan,” with his oxcart.  And he stopped and saw us there and proceeded to come over to us and built us a “lean to,” from bamboo stakes and a thatched roof, to shade us from the sun. At that moment I thought of the sheer humanity of the farmer to attempt to help us. I wanted to reward the farmer, however the only item I had to give him was a folding knife I had purchased, which I did, even though we did not speak the same language. 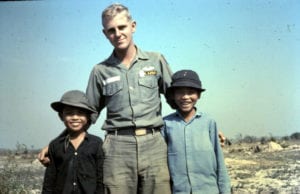 While on a mission once we were attached to a Green Beret Special Forces “B” Team. The fellow in charge was Colonel Newlin Happerset, and I was so impressed by the way the team operated, very much unlike a regular army unit. I vowed that if I wished to stay in the Military the only unit that I would be vying to be in would be special forces, if so qualified.

For those of us who served in Vietnam regardless of  their jobs, we all have a special bond which can only be earned by being “in country.” While at  he memorial as a docent or for a tour, when a gentleman enters, I always ask if they have served in the Military and if they are a Vietnam Veteran. If they say yes, a special bond happens instantly, as we tour guides already have that special bond with each other.

I finished my tour of duty in July 1967, processed out of Brigade headquarters in Chu Lai, was transported by aircraft to Long Binh for the trip “back to the world on the freedom bird.” We all had heard that if you were sent to California, do not wear your uniform so you are not identified as a soldier, for fear of being singled out by protesters, such as being called “baby killers” and “murderers.” Our aircraft lifted off with a steep climb to avoid sniper fire, and our first stop was Yakota Air Base in Japan to refuel. Next stop was Anchorage, Alaska, where we were  allowed to exit the aircraft to visit the gift shop and refresh. The temperature  when we left Saigon was 110 degrees, and the weather in Anchorge was 60 degrees. The next leg of our journey was Mcguire Air Base in New Jersey, where we were processed out after 2 days. I immediately phoned my friend Dennis, who came down with his mom to transport me home. My wish was to surprise my family, which I did. I was living home at the time, so thank god, no protesters. 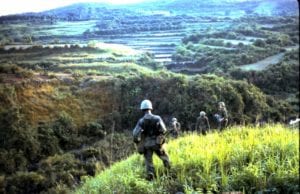 I worked in New York for the Columbia Gas Systems (a Purlic Gas Utility from the Midwest) in their accounting department.

As I was preparing to visit my place of work, my mom commented about my uniform with the many ribbons, and my coveted Combat Infantry badge, saying that I should wear my uniform to show what I had earned. I indicated that I did not think it was a good idea, as many people were against the wear. She said I should be proud of what I earned, and that I should indeed wear my uniform. Then twice she said, “well you can’t say no to mom,” so I did indeed wear my uniform on my journey. I took the  bus to the Port Authority Bus Terminal  in New York, and was walking  across 39th Street to my place of work at 120 East 41st street. I noticed a group of people a few blocks ahead of me with picket signs, and asked someone what it was, and was told that it was a “peace demonstration.” The young lady indicated that some of the young men were burning their draft cards in protest of the Vietnam War , and I did not want to confront the protesters, so I went one block out of my way to continue my journey.

When I arrived at my destination, I proceeded to the elevator to the  14th floor. On the elevator with me were two older gentlemen, and they proceeded to look me over. One of the gentlemen turned to his buddy and said “do you see this soldier, well, here is one fellow who didn’t burn his draft card.”  This moment will live with me forever. It was very truly my “welcome home.”

I have been a card carrying member of the Foundation since 1989, and received an invitation from the Memorial approximately eight years ago for a get together, as they were seeking additional tour guides. I attended the get together, and coincidentally,  there are two items I donated on display. One being in the Circle of Letters, and another a picture in the first flip book of pictures. I was about to retire from my job so it was perfect, as I always considered myself to be apart of  the Foundation, having attended most events over the years, since 1989.

My purpose since becoming a tour guide is to educate our youth on the Vietnam War, and most importantly to keep the memories alive of the 1,563 heroes and our very special woman, Captain Eleanor gGrace Alexander.

By Keri A. Giannotti, Museum Educator The Operation Babylift 45th Anniversary event was regrettably canceled due to the coronavirus outbreak.... read more