Getting to Know James L. Biringer 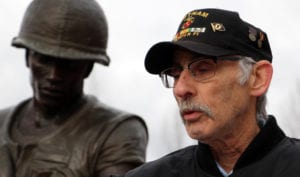 I lived in Union City, Hudson County, NJ. My neighborhood and friends were ethnically diverse—Italian, German, Irish, and Cuban immigrants. Most of us played typical street games like stick ball, two hand touch ball, etc. I was raised in a single parent home in a “Cold Water” apartment building for most of my childhood. Educated in public schools, Edison Grammar School and Emerson High School. I was unable to attend college and went to work for two years prior to my military service.

The chance of being drafted in the urban area was high, and the time was coming for me. I went through my draft physical, as did my friends. Instead of being drafted like some of my friends, I decided to join the Marine Corps for four years, from 1965–⁠1969. My reasons were partially patriotism, culture, adventure, and the challenges of the Marine Corps. The training in the Marines prepared me for Vietnam and life. Looking back, I probably could have gotten a deferment because I was an only child, or perhaps stayed in the military without having to go to Vietnam. I could not do either one in good conscious.

Unlike most men going to Vietnam, I was sent to 29 Palms California to join a new unit, 155 5th and 8″ Battery. The unit shipped out to Okinawa, then Vietnam. We arrived in July 1968 in Da Nang, then moved to Chu Lai for a period of time. The normal duty overseas was 13 months for Marines, including outside Vietnam. My original time in Vietnam was 10 months, but I extended another six months. There were two platoons of 155 Guns and one of eight inch Guns. The unit was separated working in many areas in I Corps. Our unit was scattered throughout the I Corps – Dong HA Camp Evens, Ca Lu, Camp Carroll, LZ Sharon, Rock pile, Khe Sahn. During my time in country, my unit was involved in 14 major operations. 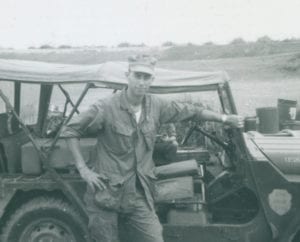 After my basic training in Parris Island, S.C. and infantry training, I was sent to communications training—Radio Telegraph Operator, parachute training, Vietnamese language, and other military schools. In Vietnam, I was in communication FDC (Fire Direction Center) in my artillery unit. We communicated between the units and were in contact with the enemy and the crew in the guns reporting the direction, coordinates, range, and type of target. In addition, I was the NCO of communication in the unit, so it was my job to insure all communications always worked efficiently.

I didn’t think there was a typical day in Vietnam. Some days were routine and they could be boring. Other days were crazy, when the fire missions required everyone doing their jobs. They could be very long days and nights, when the unit was supporting the Khe Sahn Base during its siege. We had shifts depending on the situation. There were days we filled a lot of sandbags, maintained our equipment, or relaxed. Regardless, all of us were on alert and ready.

Not sure this day was a favorite day, but it was memorable. April 15, 1968, our unit was being shelled by the enemy. By that time, I was in country 10 months. None of us got used to being shelled, but those in country for some time learned to listen to their senses and instincts. We could react quickly. This day, a new person (Charles Williams – 19) (FNG) joined the unit for a day or so, and was killed. I really didn’t know him, but his death affected me. I thought to myself “killing in war does not discriminate.” I was 23. War doesn’t care of ones’ age, sex, or religion. If you are in the wrong place at the wrong time, it’s your time.

I wasn’t really too close with anyone. There was one person, John K. We lived in bunkers, had some laughs, and worked close. Everyone came from all parts of the United States. Many were from the south and mid-west, but there were others from the east and west coasts. Overall, most in my unit and team were great guys. There were differences, but most were very good people.

The Vietnam War was over 50 years ago. I want people, especially young people, to remember and learn about those men and woman who made sacrifices. Especially during the turmoil years of the 1960s in the U.S. People can not relate to war unless they were there, but maybe us Vets can give them some insights. Some of the Vets enlisted and others were drafted, but we all did a job. People need to know the history of this controversial War. Today, people too easily forget the past. Perhaps, myself and other Vets can provide a living history of this time of history.

Unlike many Vets who came home, I still had a year left in the Marines. When I returned home I was visited friends, family, and my finance. We prepared for our wedding the next year. Then, I went to Camp Lejeune in N.C. to serve my final year, which included three months in Guantanamo, Cuba. Being in the Military, I did not experience the negativity and animosity by the public against Vietnam Veterans until I was discharged. I had my wife and family to support me unlike many Vets. My feelings and emotions stayed inside me for many years. Leaving Vietnam in 1968, there was much news on Vietnam on TV and papers until the end. Seeing the news, I can see the horrors and destruction of this war as if I was still there. 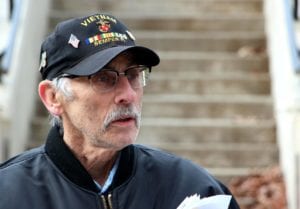 Initially, I returned to my job that was saved in a Wall Street Brokerage firm as a clerk in the margin department. I went to Rutgers University evening classes to get a degree in economics. Within a year or two, I changed jobs.

I worked for 42 years in the banking industry. I worked in the business banking sector, moving my way up to SVP, dealing with small/medium companies providing overall financial services to the companies and owners. Through mergers throughout the years I finally retired from Bank of America.

Once I retired from my job, I felt the memorial would be a great place to be involved. My friend, Jimmy M. and myself felt it was a great place to teach young people and individuals about the war and New Jersey’s involvement in the war. Also, its a place to meet other Vietnam Veterans and come together to support each other. All of us served in different branches of the service, variety of MOS (jobs), and different timelines in Vietnam, providing a variety of personal experiences to educate the public.