The Operation Babylift 45th Anniversary event was regrettably canceled due to the coronavirus outbreak. Below are remarks from our co-sponsors, Lana Noone and Steve Hartmann, who were involved in the planning of the event.

Lana Noone, the principal organizer of the event and adoptive mother of Jeannie Noone remembers the event:

My husband Byron and I got involved in Operation Babylift when we began the process to adopt a baby from Vietnam in late autumn 1974.  We didn’t know we’d be caught up in history. Our adoption was approved in February 1975, and we were told there was a nine-month wait for our baby to arrive. As the Viet Cong started to move South, the country of South Vietnam became smaller each day. In February and March of 1975, we were told the babies would not be evacuated due to the dangerous situation. Then, Ed Daly, president of World Airways, evacuated 57 Vietnamese War orphans in late March 1975. 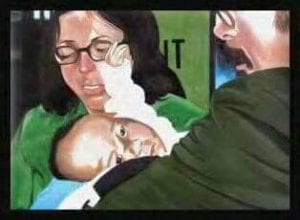 Painting of Lana and Heather on her homecoming day

The plane landed in Oakland, California on April 2, 1975, and it was as though the entire United States took notice that day. There was a terrible tragedy unfolding in Vietnam, yet here were 57 war orphans going to their forever families who were awaiting them with open arms. President Gerald R. Ford, who was an adoptee, authorized Operation Babylift.  Twenty-six flights and 2,548 orphans in total came to the United States in April 1975. To my knowledge, my husband and I were the only family to adopt two non-siblings from Operation Babylift.

Our daughter, Heather Constance Noone, was evacuated on April 5th and was hospitalized three times while en route due to pneumocystis carinii pneumonia. She arrived at JFK on April 23, 1975. She was very ill and hospitalized here on April 29, 1975 — the final day of the war. I watched the Fall of Saigon from her hospital room. Sadly, our daughter died on May 17, 1975 at 4:30 p.m. EST. When Heather died, three babies remained hospitalized in Denver, Colorado. Our daughter Jennifer Nguyen Noone was the final baby placed from Operation Babylift on June 7, 1975. Two days before Heather’s death, I sat in her hospital room knowing that the end was near. I promised her that I would never let Babylift be forgotten and that her short life would not be in vain. 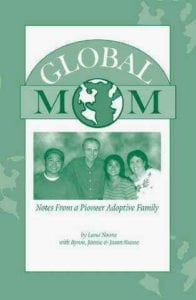 I had no clue what to do, but over the years I’ve been very fortunate to help reunite families, co-author a first-ever Babylift Play, Children of the April Rain, and write my own book, Global Mom: Notes from a Pioneer adoptive Family. With the help of Vietnam Veteran Charlie Wilber, I helped create the Vietnambabylift.org website. Our goal is to reunite all the threads of the Vietnam babylift and to recognize the unsung heroes who implemented this extraordinary humanitarian effort — one of the greatest humanitarian events of the 20th century.

The Vietnam babylift changed the complexion of the United States. Prior to Operation Babylift, international adoption was very sparse. Today, international adoption is part of the fabric of the United States. As an adoptive mom, I’m very grateful for the opportunity I had to be a mother and now grandmother.  My husband and I adopted our son Jason Paik Noone from South Korea, and I’m now a grandma to two extraordinary grandchildren, Heather and Jayden. 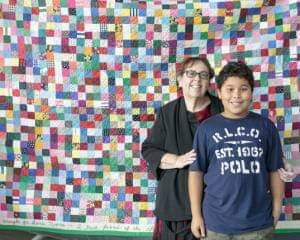 Sister Marie Therese LeBlanc, a nun with Immaculate Heart of Mary in Michigan, assisted with orphans in Vietnam and Operation Babylift. Sister Cherie Clark and Ross Meador are the only Vietnam babylift participants who were evacuated twice. They were evacuated in mid-April and returned to Vietnam to help with the remainder of the orphans. Sister LeBlanc spoke to the adoptees at a Babylift program at the Smithsonian Hirshhorn Museum in Washington, D.C., and said to the adoptees, “You are the survivors. You survived the war and tremendous upheaval. Always remember that. You survived.”

Steve Hartmann is a singer/songwriter who was going to sing his song “You Are” at the 45th Anniversary event. You can listen to the song at his website, https://stevehartmannmusic.com/.

I was born in Dalat, Vietnam towards the end of the war and adopted and raised outside of Philadelphia. I’ve always wondered if the people that helped me get to the United States knew just how much they helped me. I’ve wondered if they ever asked themselves if their sacrifices made any real difference.

I grew up never knowing the answer to so many questions  — where I was from and if I still have family there, my medical and family history, who do I look like more —  mom or dad, if I am 100 percent Vietnamese, and more. As I grew older, these unanswered questions became more frequent, especially when I had a son of my own.

As much as they will always linger, I’ve come to terms with the unanswered questions as much as I can. I find peace in knowing that with all I don’t know, I know that I’ve been given a chance not many have had — a life that may not have been if not for the efforts of so many. Not having any real answers for my son is difficult, but we show him love, laughter, compassion, manners, and hard work.

For those brave men and women that served during such an impossible time in our world’s history, and for anyone that’s doubted their worth or impact, I wanted to put something out there in the hopes that one, some, or many may hear it and find some sense of peace. It’s the only way I know how to say thank you to everyone that’s sacrificed so much to give me a chance. I hope this reaches anyone that may wonder — even doubt at times — their impact and come to find that you are loved, seen, heard, felt, appreciated, and matter.