Sculptor of the Memorial

Nationally known for his portraits and figures in bronze, Thomas Jay Warren of Trenton was selected from among many artists to create the three bronze statues that stand at the center of the Memorial.

Warren, a native of Mississippi, was schooled in fine arts and sculpture at Mississippi State College. He later studied at Johnson Atelier Sculpture Institute in Hamilton Township, New Jersey. He was an instructor at Johnson Atelier, teaching portrait and figure modeling.

His sculptures range from life-size to monumental. Warren has created statues of such well known men as Martin Luther King, Jr., for the Newark City Hall and Medgar Evers for a memorial to the slain civil rights leader in Jackson, Mississippi, as well as a marble relief piece of George Washington at Washington’s Crossing, New Jersey.

Warren was commissioned to design three over-sized statues for the Memorial. Cast in bronze, they represent the soldiers who were wounded or killed in Southeast Asia, the women who served and all those who eventually came home. 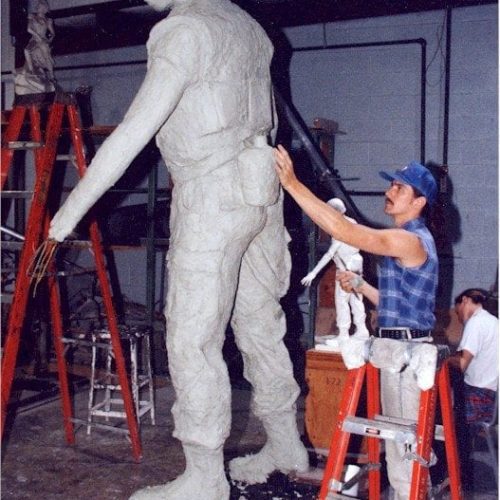