During the day, Kelly Everhard paints Buicks and Mustangs.

In the evening, she paints a piece of history.

The New Jersey native, who works as an auto detailer, volunteers her services as the principal painter of a Huey helicopter that served in the Vietnam War. The project began last February, when a group of Vietnam veterans received a 1964 Bell UH-1D Huey from the National Guard.

It took 5,000 hours of labor — 400 of which were credited to Kelly — to restore the Huey to its 20th-century glory. But the product isn’t merely a testament to her artistry. For Kelly, her involvement with the Huey is a gift to her father, a Marine who was deployed to Vietnam in 1966.

On May 7, Kelly and her father, Casper “Cappy” Everhard, will stand together as they witness the unveiling of the Huey during a remembrance ceremony at the New Jersey Vietnam Veterans’ Memorial in Holmdel.

“It was an honor to be involved with this project,” she said. “I love the smile it puts on my father’s face.”

Cappy served as a tank crewman for the Bravo Company, 1st Marine Division. While he spent his 20th birthday overseas, his only wish was to return to the United States, start a family and begin celebrating his children’s birthdays on American soil.

But the return home wasn’t what he expected. Instead of being embraced by his country, Everhard said he was shunned.

“Looking back on it now, it was easier to fight a war in Vietnam than it was to come back after the war,” he said.

For three decades, he didn’t talk about the war. But when the New Jersey Vietnam Veterans’ Memorial opened up to the public, so did Cappy.

“I’ve been doing tours ever since the memorial opened,” he said.

As he shared the stories of Vietnam with those willing to listen, the process of healing began. And it continued as Cappy witnessed his daughter working side-by-side with veterans who once brushed shoulders in Vietnam.

The pair’s involvement with the project opened a channel between them.

“We were close to begin with, but we were closer now than ever before,” Kelly said.

The project put a strain on her daily schedule. Kelly would work at her day job from 7 a.m. to 6 p.m., drive an hour to the Holmdel memorial and accompany the Huey until 10 p.m. or later. But she said the “once-in-a-lifetime” project was worth it. After spending hours and hours with the veterans, Kelly feels as if she has dozens of “adopted” fathers.

As for Cappy, he couldn’t be more proud.

“Every time I look at the Huey, I’m going to think of her,” he said. “And the camaraderie between the veterans working on the project was inspirational.”

The project is being dubbed as the Huey’s “final landing.” But in the hearts of the Vietnam War veterans, it continues to soar. 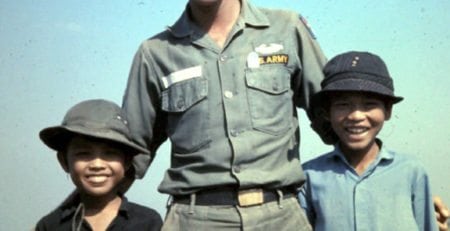 Barry Breyer runs a marketing company in Atlanta, GA where he has lived for the last 30 years. But... read more