Due to the public health concern presented by the novel coronavirus outbreak (COVID-19), the New Jersey Vietnam Veterans’ Memorial regrettably canceled the planned 45th Anniversary Commemoration of Operation Babylift. However, it is fitting to reflect on this little known story of the Vietnam War.

As the war was coming to an end in South Vietnam, President Gerald Ford ordered the evacuation of Vietnamese orphans from Saigon as the North Vietnamese offensive was looming. This mission, officially named “Operation Babylift”, began this month on April 4. During this time, over 3,000 orphans were evacuated and brought to the United States, where they were later adopted to American families throughout the country. 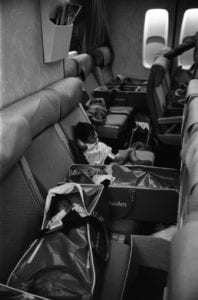 At the evacuation’s height — April 20-28, 1975 — about 40 planes left Saigon every 24 hours, according to the Gerald Ford Presidential Library. These aircrafts, designed to transport no more than 100 passengers, carried in excess of 180 evacuees, according to the Library.

The New Jersey Vietnam Veterans’ Memorial was honored to be selected as the site of this event to help in remembering these stories. We look forward to an event in the future, and would love to include your personal stories from Operation Babylift. To share, please email our Museum Educator, Keri A. Giannotti at kgiannotti@njvvmf.org.

We would like to extend our appreciation to our co-sponsors who were involved in the planning of the event and include some remarks on their behalf. Read their stories HERE.