Barry Breyer runs a marketing company in Atlanta, GA where he has lived for the last 30 years. But 40 years ago he was a young kid from Bergenfield, NJ who found himself part of a Huey Helicopter crew flying with the 116th Assault Helicopter Company (the Hornets) in Vietnam.

When the war ended he briefly came back to NJ before packing his bags for Georgia and a life that had nothing to do with rescuing infantrymen from rice patties. Breyer did his best to steer clear of fellow vets for those first few years, but eventually reunited with his fellow Hornets through the magic of Facebook.

The guys, who trade stories, photos and fragments of memories with their Facebook group, were on the search for a reunion site. Breyer didn’t know that this would eventually lead him to his home state. “My two worlds collided and it got me very curious,” Breyer said when he discovered the New Jersey Vietnam Veterans’ Memorial Foundation (NJVVMF) through a friend.

Breyer looked deeper and discovered that the Foundation’s Veteran Volunteers were restoring the very Helicopter he had flown in as a medic turned door gunner, near the border of Cambodia.

The aircraft served two tours in Vietnam, the first with the 116th Assault Helicopter Company in Cu Chi and the second with the 118th Assault Helicopter Company in Bien Hoa. After the War, the helicopter flew for a time with the Army’s 10th Mountain Division. The aircraft has been retired for more than 20 years with the New Jersey Army National Guard before the NJVVMF brought it to a hangar at Monmouth Executive Airport in Wall, NJ last year.

The NJVVMF Huey Restoration Crew, a group of volunteers that includes veterans from Iraq, from the inside out.

This has been a personal project for Ken Gurbisz and Carl Burns, who flew on Hueys. It is also a labor of love for the Foundation’s Executive Director, Bill Linderman, who served with an Ordnance Company for six months and later with the Vung Tau sub-area command. “Most who served in the Vietnam War,” Linderman said, “have an attachment to the helicopter. It was their duty, their rescue, the center of their lives in combat.”

“When they see the Huey,” Gurbisz said, “it all comes rushing back, the history, the feelings.”

“It’s more than our helicopter,” Breyer said. “It’s such a symbol to all the guys over there. The most wonderful sound in the world is those rotor blades. We were the cavalry. Guys would say, ‘Ok, good, the Hornet’s coming.’ We never said it’s too hot (dangerous). We took great pride in that.”

The Huey Helicopter will be an engaging addition to the New Jersey Vietnam Veterans’ Memorial and Vietnam Era Museum & Educational Center. Along with the Memorial and Museum, the Huey will serve as a lasting tribute to those who served our country and help to validate our mission to leave a legacy to future generations.

“We want to make sure we keep our doors open to keep the memories of the people we lost alive,” Lindeman said. “These people are the fabric of New Jersey and they should not forgotten.”

This Huey won’t fly again. Not literally anyway. It will come to life on Wednesday, May 7 when it “lands” at the center of the newly constructed Huey Plaza at the entrance to the Vietnam Era Museum & Educational Center where our Vietnam Veteran tour guides will share their stores as part of our guided tour program.

“It’s a real homecoming for me personally,” said Breyer, who will make the trip up with more than 20 guys from his company for the ceremony. He said he’s also hoping to make it the center of future reunions. “I’m so proud of my home state for putting this together. Even though I’ve been in Atlanta for 30 years, I’m still a Jersey Boy.”

The New Jersey Vietnam Veterans Remembrance Day Ceremony will be held at the Vietnam Era Museum & Educational Center at 11:00 AM on Wednesday, May 7, 2014. 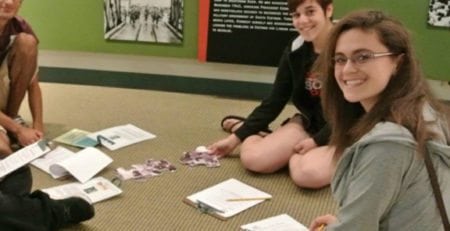 During the day, Kelly Everhard paints Buicks and Mustangs. In the evening, she paints a piece of history. The New Jersey... read more