Last week we shared the history and significance of celebrating military spouses. Continuing the celebration of Military Spouses, we are pleased to be able to share a conversation between one of our own Vietnam Veteran tour guides, Carl Burns and his wife, Ruth Ann. While Carl was serving in Vietnam, Ruth Ann was able to go to Vietnam to cover war as a journalist. Below is a transcript of their story. 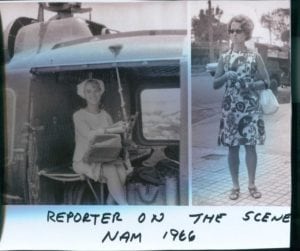 Ruth Ann: As a journalism student at Rutgers University I experienced many feelings on the war.  On campus it was being dissected daily by those opposed to the war. The newspapers and television painted a scanty, often confusing picture of life and death, blood and pacification, hope and desolation. And my husband of six months was flying a helicopter out of some place called Cu Chi. Most Americans couldn’t pronounce the names of places in Vietnam–Phuc Lon, Trang Bang, and Hue, they almost sounded like dirty words.

Getting to Vietnam was a long and sometimes discouraging battle in itself.  I was only 21 at the time, between my junior and senior year at Douglass College in New Brunswick, New Jersey.  I worked as a feature writer for a regional daily newspaper. Through countless letters, visits to media outlets in New York and phone calls, I managed to cut through the military red tape. My trip cost $2,000, and I paid for it from numerous contracts with media from Parade Magazine to the North American Newspaper Alliance.

Armed only with the top of my wedding cake frozen in dry ice, notebooks, a loaned typewriter and cameras from my newspaper, I left for Vietnam.  It was 12,000 miles, 29 flight hours, 7 Pan Am dinners and 5 stopovers. Landing was my first taste of the war zone. Our plane dive-bombed for the runway, fearful of enemy firepower.  Overheads spilled open, galley kitchen items tumbled down, and a child actually rolled down the aisle. Welcome to Tan Son Nhut Airport.

What met my eye immediately was the vast complexity of this jungle war.  Life in Saigon went on like the VC was just another word. Traffic jams rivaled New York and barbed wire was everywhere.  Carl’s first words to me after telling me I was beautiful were that we had a little problem with my credentials and he joked, “I might be court martialed.”  We spent two days finding the Marine major who actually wrote the in-country rules. He was a big burly guy, chomping on a cigar, looking so much like the tough Marine he was.  He looked at my credentials, letters and contracts, and said “Little lady, people are running from this war and look at all you did to get here. You can cover this war.” He stamped my credentials. Finally we had a victory. 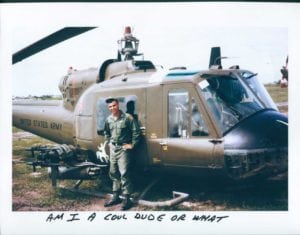 Carl:  Of course in the beginning I did not want Ruth Ann to come to a warzone. People were running from this war and she was fighting to come over.  I watched all my hoochmates making plans to fly to Hawaii or Thailand for two weeks of R&R with their wives and mine was about to land in Saigon.

My company commander could not have been more supportive.  First he gave me the bad news that she would not be allowed in country because she was a dependent.  But then I looked at him and said, “you don’t know Ruth Ann, she is on her way Sir.” Colonel Peterson gave her his best helicopter pilots to get her around in country. Our experience  was unique and I got to see a side of the war that I never would have been exposed to.

There was the story of An Lac orphanage in Vietnam.  Madame Ngai lost her own husband and son to the war in North Vietnam.  The humanitarian doctor, Tom Dooley helped her establish her orphanage in An Lac.  More than 300 children was a hard sight to see; the collateral of war. There were too many children with missing limbs, babies in cribs staring out blankly. Toddlers run up to Ruth Ann and wrapped their little arms around her legs, leaving her dress covered with tiny little handprints.

Ruth Ann: I interviewed nurses in the Third Field Hospital from the Army Nursing Corp.  Helicopters flew in broken American bodies and surgeries went on day and night.  If you have ever been a fan of Mash and Alan Alda, you have a sense of what the Third Field Hospital was like. I saw and felt the strength and will of America’s soldiers. They were my age.  They had missing limbs, scarred faces, broken bones, but no broken wills.

There was Mass at Cu Chi “cathedral” in an open field with a wooden cross and sandbags in ditches to protect us from enemy incoming fire. The Army priest was a third into the Mass when the sound of what I thought was incoming mortar split the heavy air.  I instinctively jumped, but the soldier next to me leaned over and said, “Don’t worry, it is ours not theirs.” Kyrie Eleison, Christi Eleison, and an eight-inch howitzer spit its long-range artillery over our heads. Father Piskura looked into the bloody face of death daily. He defined courage as “fright after prayer.” 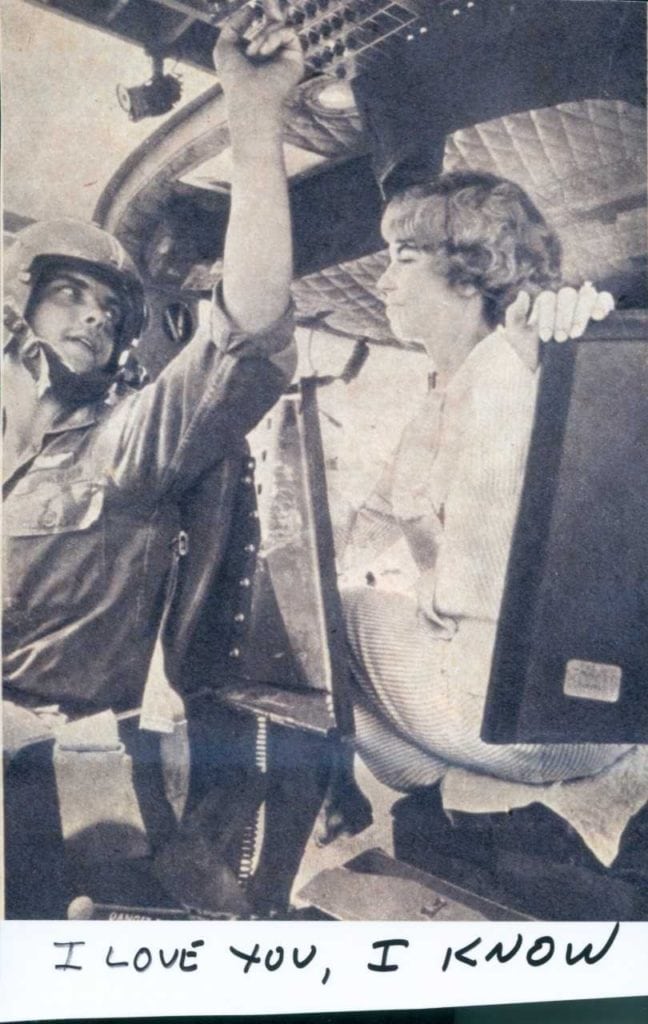 Carl:  For those who waited at home during the war, it was another type of hell, lonely and lacking in support. Ruth Ann lived for slim airmail letters that would often arrive in clumps.  I promised her to write every day and she did the same. Those letters were our lifeline to home and mail was rarely on time. Toward the end of my tour, I made Ruth Ann a “short-timers” calendar on index cards marking my last 60 days in Nam. I made her promise to only flip one card per day but knowing her like I did, I knew all 60 would be flipped at once and then she would go back day by day.  It was our survival calendar to when I would be home again and our married life could begin again.

Ruth Ann: Carl and I visited a hamlet and village chief. I sat on a grass mat to sip tea with peasant women. Most thatched roof huts had two rooms.  Seven children slept on bamboo slats. There was a fire pit in the middle of the room and a five-foot bomb shelter hole toward the back. The village chief’s wife smiled and she happily nodded when I complimented her children through a translator.

Carl: Vietnam was a country at war for what would seem forever. We saw it in the ravaged countryside, in the bomb shelters in every thatched roof hut, but especially in the faces of children, the waifs of war.  Saigon was a refugee city. Children as young as three slept on grass mats on the sidewalks outside our hotel on Tu Do Street.  The hotel was bombed, the daily market was bombed. It was the first war in which when fighting ceased for a bit, soldiers returned to their hooches for a beer, TV, a sometimes shower from a water drum on stilts, and a game of touch football.

Ruth Ann: The market where I bargained for presents to bring home was hit by a grenade the next day.  The hotel on Tu Do Street, called the gathering place of the elite when the French were there, was bombed a week after I left Saigon.  The elite were lizards when I was there.

In Vietnam we were never able to separate out the war from the warriors.  There were no parades, no yellow ribbons, and no rallies. Vietnam vets were flipped the bird, cursed at, and called “baby killers.” I saw bravery every day I was in- country.  I saw valor and self-sacrifice. I saw complex forces at work on both sides. I met heroes and heroines, my husband was one of the heroes. Our soldiers might be considered ordinary people back home, but here they were doing extraordinary things.  I didn’t want to leave, but my husband and my parents were urging me to return. And I had a college degree to finish. It was very tough to go from adrenalin-pounding-days when every sense is on guard, back to college classrooms where the war debate raged.

Carl:  I have to admit, I was happy to see Ruth Ann leave Vietnam and return to college. I missed her terribly but knew that she would have a deep understanding of the war and my role in it because she experienced it firsthand. We encourage to you come and hear these stories for yourself on one of our Saturday Tours.

Carl Burn and Ruth Ann Burns are both proud and active Rutgers Alumni, particularly the Rutgers Oral History Archives. Carl is a regular on our tours both with school groups and our Saturday tours. We hope you will hear his story in person, by joining us for a tour of the Memorial.

Keri A. Giannotti is our Museum Educator and a full time History teacher at Bloomfield High School in Bloomfield, New Jersey. If you have a topic or idea for an educationally related story contact her at kgiannotti@njvvmf.org

Getting to Know Pat Vellucci By Greg Waters, Curator This is a series of spotlights on our Vietnam Veteran Tour Guides.... read more

A Face for Every Name

2019 Teacher of the Year: Robert Gangi

Rob Presenting at the 2018 Forum on the Tet Offensive (photo credit Michael McMahon) Celebrating a Commitment to our Educational... read more

Holidays allow us to reflect on important people and event in our lives and collective history. At the New... read more