As the museum curator with the New Jersey Vietnam Era Museum, I occasionally receive phone calls from individuals who have items that they would like to donate to our collections. These calls have grown increasingly common in the last few years as Veterans who served in Vietnam are going through their closets and attics and they are rediscovering items from their time serving. I also hear from other museums and historical organizations that want to share pieces of their collections with us. What these individuals and groups have in common is the desire for these items to be cared for and kept so they can be appreciated by future generations.

I received one of these calls several weeks ago from Butch Maisel, the museum curator with the Center for Military History at the Boys’ Latin School in Baltimore, Maryland. He called to let me 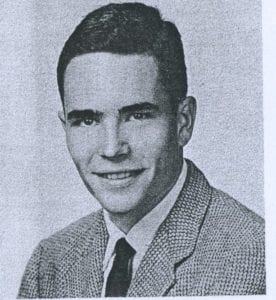 know that a local church in Baltimore had contacted him to request that he come take a look at a large box that had been left anonymously in their parking lot. Upon arriving, he found a box full of items related to the life of Richard Seibert. He brought the box back to his museum and, after some research, discovered that Richard Seibert was born and raised in New Jersey and was killed in action while serving in Vietnam in 1968. Butch called me because he realized that these items should be returned to the Seibert family and that our organization would have a much better chance of reconnecting with the family than he would in Baltimore. I drove down to Baltimore the following weekend to meet Butch and pick up the items.

I was surprised by the very personal nature of the items in the box. Richard’s Army Uniform was neatly folded and sat alongside  the flag that was draped over his coffin. His high school yearbook was full of warm messages from his classmates. A large bundle of envelopes contained the letters that he wrote home to his family while serving in Vietnam. A yellowed newspaper article told the story of him corresponding with a class of 3rd graders in New Jersey while he served in Vietnam and another broke the news of his death a few weeks later. Another stack of letters were written after his death and included notes of sympathy from President Lyndon B. Johnson and General William Westmoreland. All together, the items in the box told the story of a full life that was cut short during the chaos of war.

I brought the box back to our museum and began to research the life of Richard Seibert. I learned that he was born and raised in Far Hills, New Jersey. He graduated from Bernards High School in 1960 and later moved to Maryland where he attended the University of Baltimore. Seibert was drafted into the United States Army in March of 1966. He trained at Fort Riley in Kansas, Fort Ord in California, and attended Officer Candidate School at Fort Benning, Georgia. He was commissioned as a second lieutenant and was assigned as a field instructor at Fort Bragg, South Carolina, before receiving orders to Vietnam. He arrived in Vietnam in September of 1967 and was promoted to first lieutenant a few months later. Richard Seibert was killed in action on January 10, 1968, while on patrol with his unit in the Queson Valley. He was posthumously awarded the Distinguished Service Cross, the second highest military award for members of the United States Army for extreme acts of gallantry in combat.

I quickly realized that these items didn’t belong in our museum collections but rather should be kept by the Seibert family. In my research I discovered 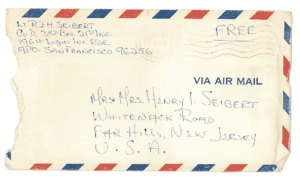 that all of Richard’s siblings had since passed away and I found an obituary for his sister Jane. The obituary listed the names of three nieces and I was able to make contact with them. The mystery of how the box was lost was quickly solved. The box was among Jane’s belongings and upon her death it was misplaced in the hurried process of packing up her things and deciding what should be kept and what should be thrown away. It’s unclear how the box made it to the church parking lot but clearly whoever dropped it off realized how important these items were.

I drove up to Basking Ridge a few weeks later to return the items to Richard’s niece. The family was extremely grateful to have these items returned and they look forward to learning more about the life of an uncle that they never knew. They plan to come together for Thanksgiving and read his letters as a family.

Do you have items from the Vietnam Era that you would like to donate to our museum collections? Contact Curator Greg Waters at gwaters@njvvmf.org. Include a description and photographs of the items you would like to donate and this information will be forwarded to our collections committee for final decision. Please note that our museum storage space is limited and we cannot accept all items.