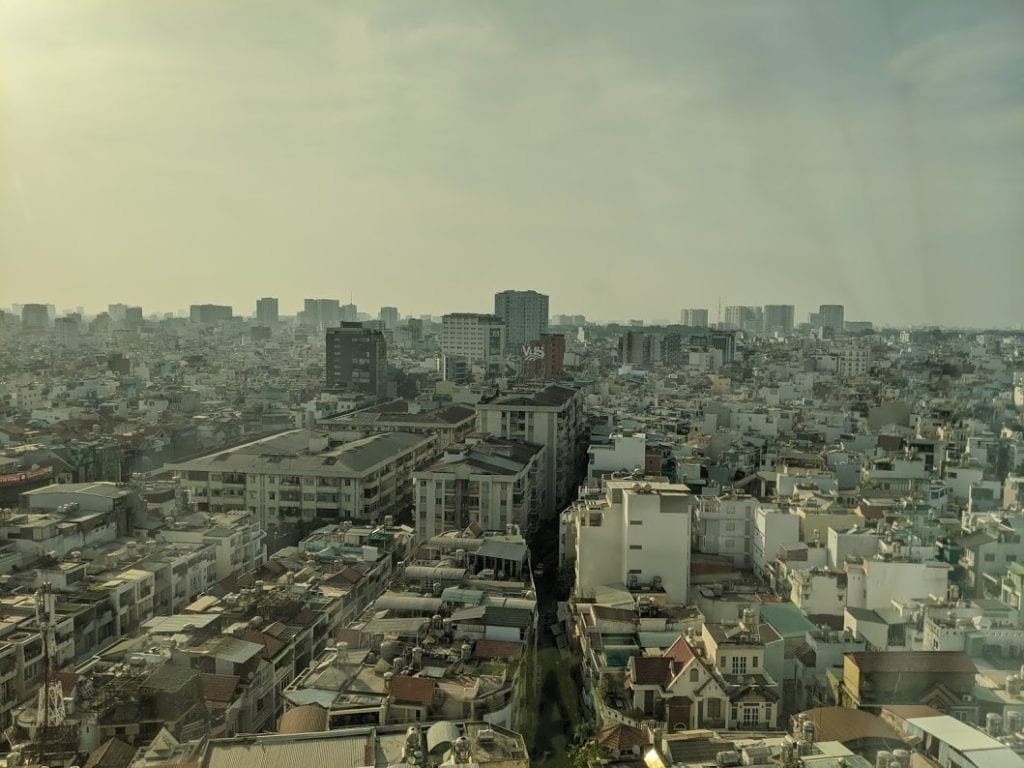 My flight left JFK International Airport at 12:20 a.m., and 16 hours later I landed in Taiwan for a two-hour layover. I was back on a plane for a four-hour flight to my final destination, Tan Son Nhat International Airport.. After nearly 23 hours in transit I stumbled out of the airport into the sticky air and blinding sunshine of Southeast Asia. A critical lack of sleep and the strange, mind-warping side effects of air travel certainly left me feeling like a stranger in a very strange land.

The names of places — just like the names of people — tell stories. This is certainly true of Ho Chi Minh City, the largest city in Vietnam. Prior to 1976 this place was called Saigon. Following the withdrawal of American troops and the end of the war, the city was renamed Ho Chi Minh City in honor of the communist revolutionary and North Vietnamese leader.

Saigon, however, is a name that refuses to disappear. You can find entire markets dedicated to selling T-shirts and other souvenirs emblazoned with the name. Locals use both names of the city interchangeably, and older residents, especially those who lived during the war, refer to their home as Saigon. Even the airport code of the city’s international airport, SGN, is an echo of its former name. 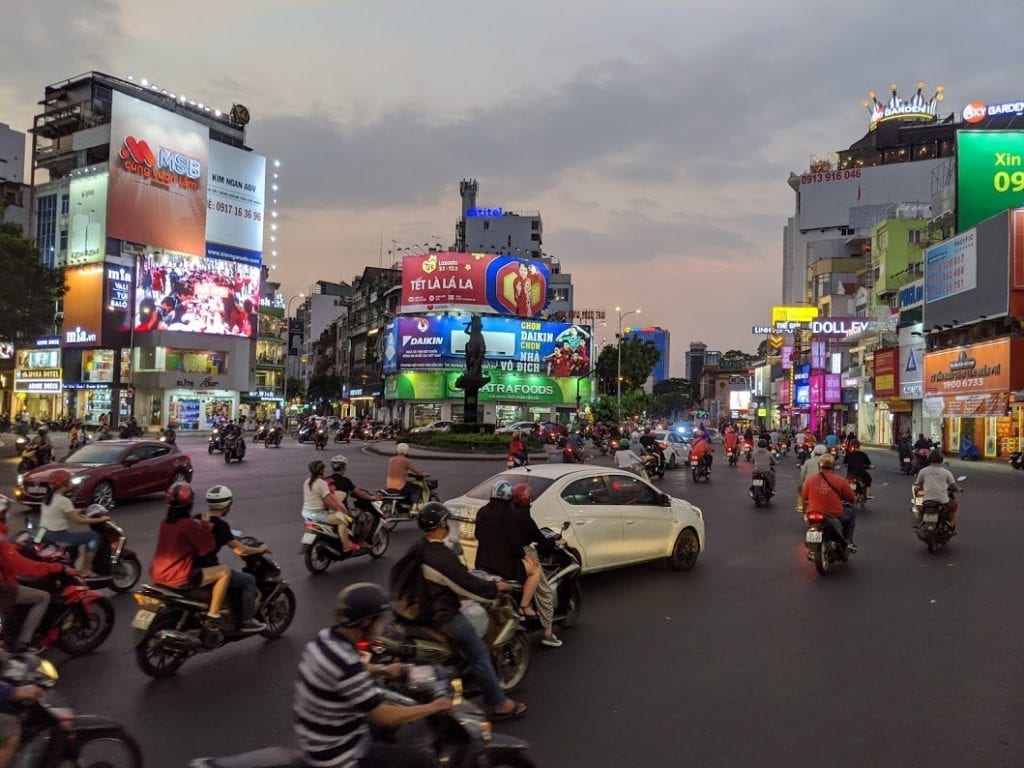 The first thing you notice upon arriving in Saigon are the scooters. It is estimated that there are over 8 million of them. This number is remarkable when you consider that the population of the entire metropolis is approximately 12 million people. The scooters are everywhere, zooming around the city in vast herds of their fellow travelers. Each of them is equipped with a horn that they use constantly as an improvised form of echolocation. By honking repeatedly, they let everyone else around them know where they are, and all drivers adjust accordingly. The result is an incredible cacophony of high-pitched scooter engines and endless honking.

The other thing you quickly realize is that traffic laws, while most certainly formally written down somewhere, are completely ignored by virtually everyone. This may seem like a recipe for disaster, but somehow, someway, it works.

A pecking order is established in the streets and roundabouts, and a strange kinetic dance results. Size is clearly the biggest advantage — pedestrians get out of the way of scooters, scooters get out of the way of cars, and cars get out of the way of trucks. Forasmuch as vehicular chaos that I witnessed in the streets of Saigon, I saw no accidents of any kind. The locals assured me that they certainly do happen but at a much lower rate than one might expect. Crossing the street at first felt like certain suicide, but I quickly learned how to navigate by mimicking the locals. Step off the sidewalk boldly with clear intention, walk at a normal pace without any sudden movements, and be amazed as the oncoming tidal wave of scooters bends around you as you make your way across the street, feeling like Moses parting the Red Sea. Exhilarating. Terrifying. I highly recommend it. 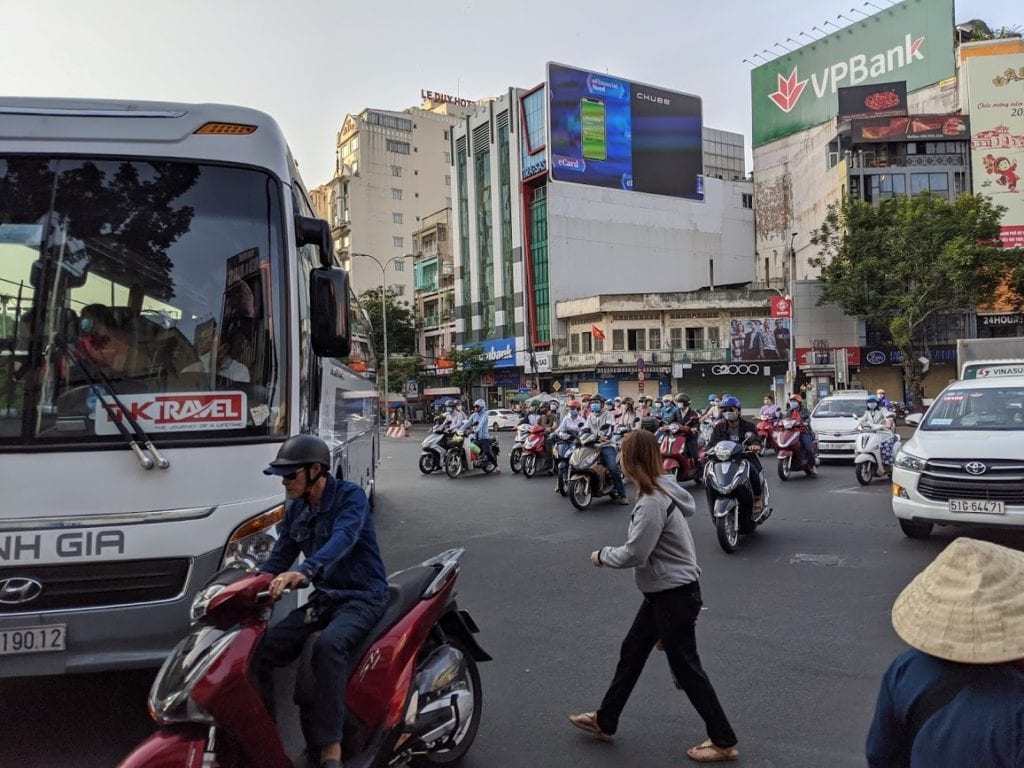 Crossing the street in Saigon

I forced myself to stay awake for the rest of the day in order to adjust to the local time zone. Even the clock reminded me how far away from home I was – noon in Saigon meant it was midnight in New Jersey. It was just my first day in country, and I had already gained a new level of empathy for the men and women who served here during the war. It was a strange adjustment for me to make as a visitor, and I can’t imagine what it was like to arrive here for a yearlong tour of duty. I fell asleep to the sounds of traffic and city life in the streets below, thankful that I could be visiting for a few weeks as a tourist and not as a soldier during wartime.

Next Chapter: Searching for the war in modern Saigon