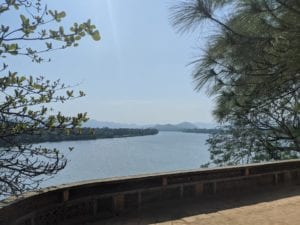 After leaving the Mekong Delta, I took a short plane ride to the coastal city of Da Nang and then traveled by car north to Hue. I arrived in Hue on a very hot and humid day, the sunshine beating down as the Perfume River flowed lazily towards the ocean a few miles to the northeast.

Hue (pronounced hway) is an ancient city that dates back many centuries. It was the capital of the country from 1802-1945 and holds an important place in the region’s history. I wanted to visit the city because Hue was the site of one of the longest and bloodiest battles of the Vietnam War. The Battle of Hue also marked the beginning of the Tet Offensive, a massive military campaign against the Americans and their allies orchestrated by the North Vietnamese Army and the Vietcong.

This series of coordinated surprise attacks, named after the Vietnamese new year celebration, began on January 30, 1968. They took place simultaneously across the country, catching American forces and their allies off guard. Several cities were taken over by enemy forces, including Hue, and the fight to take them back caused widespread damage and significant casualties. 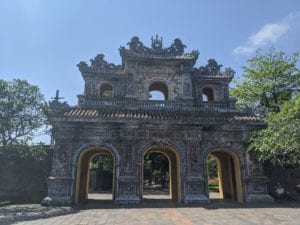 Caption: Gate to the Imperial City

The Battle of Hue lasted over a month, with American forces and their allies finally retaking the city on March 2, 1968. Much of the city was destroyed as Marines and South Vietnamese soldiers fought door to door in brutal close-quarter combat. It is estimated that over 5,000 civilians were killed in the fighting along with a comparable number of enemy soldiers. 216 Americans lost their lives during the battle with another 1,584 wounded.

Today the city is a popular tourist destination, with the oldest part of the city deemed a UNESCO World Heritage Site. While the city had changed much in the intervening 53 years since the Battle of Hue, there are still a few places where evidence of the war can still be found. The most obvious are the scars from bullets and explosions that damaged the walls surrounding the old city. 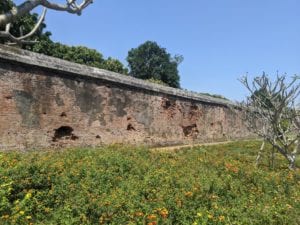 Caption: Remnants of the Battle of Hue

The Truong Tien Bridge was also heavily damaged during the battle and bullet holes can still be found in its steel support beams. This is juxtaposed against the nightly light displays that now light up the bridge in bright colors to attract tourists.

Another stark reminder of the war are the rusting American military vehicles on display in front of the local military history museum, similar to other museum displays found across the country.

One other place where the history of the war still echoes in Hue was the local tourist economy. It was a little disconcerting, if not surprising, to find several Vietnam War-themed bars and restaurants in Hue, including the very popular DMZ Bar (similar to another very popular bar in Saigon named Apocalypse Now). It seems that there is no collective sentimentality for the past, especially for such a difficult period of history. Life in Hue continues forward without looking back, like a river flowing to the sea.