Chapter 5:  Into the Mekong

The Mekong River begins high in the Tibetan Plateau and winds its way through China, Myanmar, Laos, Thailand, Cambodia, and finally comes to an end nearly 3,000 miles later in southern Vietnam. As it nears the South China Sea it begins to stretch out like an open hand, creating the massive Mekong Delta that makes up much of the country south of Saigon. My trip into the delta was a slight detour as I was ultimately headed north but I wanted to experience this unique ecosystem where many important events took place during the Vietnam War.

The Mekong Delta is the source of a large percentage of Vietnam’s agricultural production, including over half of the rice grown in the country. During the war, the North Vietnamese and the Vietcong relied on the region for food production as well as important transportation routes that allowed them to resupply their troops. The unique realities of life in the delta required the United States military to adapt to the environment as the tactics used farther north in the country were ineffective. The brown-water navy, for example, patrolled the marshes, swamps, canals, and rivers in the region on boats as foot patrols were unable to operate effectively. Several large operations took place in the Mekong, including Operation Market Time and Operation Game Warden, and the experiences of the soldiers who fought here were much different from those who served elsewhere in the country.

My destination in the delta was a small lodge several miles outside of Can Tho, the region’s capital. Can Tho is a thriving city with an airport and growing downtown along the river. Large hotels with restaurants and spas cater to tourists visiting the region. I decided, however, that I wanted to experience the river from a closer perspective. My accommodations at the lodge consisted of a bamboo hut with a thatched roof and three walls. The fourth wall was open to the delta, with a small branch of the Mekong River running just outside. 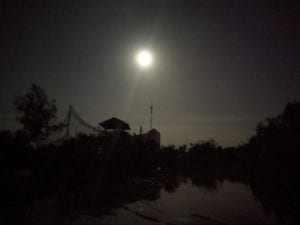 Full moon over the Mekong Delta

It was hot and humid and the air conditioning consisted of the occasional river breeze. The delta is known for its incredible diversity of flora and fauna and I was able to observe many examples of both during my stay; the frogs sang while the mosquitoes and gnats and dragonflies and other unidentified insects flitted around, especially as I slept, and bats darted around my river hut as a fell asleep each night.

Despite the rustic nature of my accommodations I slept better in the Mekong, lulled to sleep by the sounds of the river and the cacophony of nature than I did in any of the actual hotels I stayed in elsewhere on my trip.

I arose at four in the morning during my second day in the delta to take a boat tour of the surrounding area. Our group traveled in sleepy silence as low hanging clouds drifted past and the full moon reflected off the calm water. After a few minutes, we joined the main branch of the Mekong River and I was able to fully appreciate just how large this waterway truly is. 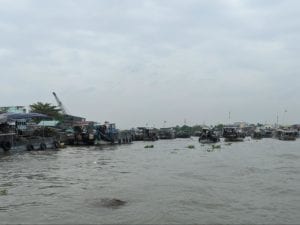 The sun began to rise as we traveled down the middle of the river, both banks were lined with homes and businesses that were already bustling in the early morning. Fishing boats were already hard at work, coming and going. Other boats, weighed down with fruits and vegetables and other goods, were headed to various markets in the area. As the sun came up, the colors of the delta came to life. The muddy brown water and the bluest of skies, accentuated with occasional puffy clouds, contrasted with the deep green jungle and the fishing boats painted in bright colors.

Our destination was the Cai Rang Floating Market. Locals have been traveling to this spot on the river for many decades to buy and sell fruits, vegetables, flowers, fish, and a wide array of other goods. The river was dotted with boats of various sizes. Many of the larger vessels were anchored in place and open for business. The numerous smaller boats seemed to never stop moving as they navigated the frenetic marketplace. A small boat with a single occupant came up alongside ours and I realized that he brought with him a mobile coffee shop. We enjoyed observing the busy market, trying to make sense of who was buying and who was selling. 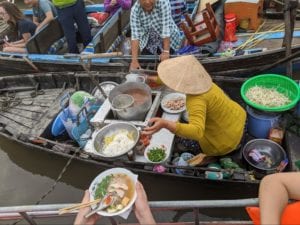 Breakfast on the river

We then traveled farther upriver to a much smaller market with far fewer tourists and more locals. Here we were met by a small elderly woman rowing a boat that contained a small restaurant. She passed us steaming bowls of Pho, a Vietnamese soup consisting of broth, rice noodles, herbs, and chicken that is traditionally eaten for breakfast in Vietnam. It was a remarkable meal, made even more memorable as I ate it while sitting on a boat in the middle of the Mekong River.

My time in the Mekong was limited but I greatly enjoyed learning about this unique place. As is the case with all of Vietnam, changes are coming to the region that will most likely alter the landscape and the environment in many ways. During the Vietnam War, for example, few roads existed in the region, and the only way to reach many places in the delta was by boat. The river was in many cases the only way to transport people and goods in the region. New highways and roads are beginning to crisscross the landscape and connect previously inaccessible places to the outside world. Bridges are being built over rivers that were previously impassable by car. Commerce is being altered as the river markets that have been a pillar of the local economy are now shrinking as goods are shipped overland. 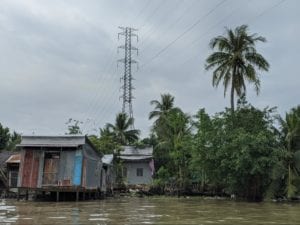 The past and future meet on the Mekong

It was interesting to see the number of tourist boats like mine that were visiting the markets. It seems that one of the main purposes of the modern river markets is to give tourists a glimpse into how life in the delta used to be. These markets may continue on as a kind of living museum, as long as tourist dollars make it worthwhile. All of Vietnam seems to be dealing with this form of rapid expansion and change. It’s hard to determine if these changes are good or bad – perhaps they are a little of both.

Next Chapter: My Lai