Chapter 4: A Rooftop in Saigon

I set out on the morning of my last day in Saigon on a mission to visit one of the most iconic spots in American history: 22 Gia Long Street.

22 Gia Long Street, taken from across the street

American combat troops were ordered out of Vietnam in 1973, but the war continued on for another two years as northern forces made their way south to reclaim the entire country. They reached Saigon, the southern capital, in April of 1975. By this time the vast majority of Americans had already been evacuated, but an estimated 1,000 civilians, military advisors, and journalists remained in the city.

In addition, thousands of Vietnamese citizens who had allied with the Americans were now in danger. As northern forces approached the city, they began shelling strategic locations, including the airport. Extensive damage to the runways made the previously planned mass evacuation by plane impossible. The remaining Americans and their Vietnamese allies made their way to various predetermined rooftops throughout the city to be evacuated to safety by helicopter as northern forces began to take control of the city.

During the war, 22 Gia Long Street was the address of the Pittman Apartments, home to Americans working for the CIA and other government agencies. In 1975 it was designated as one of the locations for the helicopter evacuation due to its location and the unique design of its roof. On April 29, a Dutch journalist named Hubert Van Es was working in a nearby building when a colleague told him that a helicopter was landing on the rooftop. He quickly pulled out his camera and documented this critical moment in the evacuation and in the war itself. The photographs that he took that day have become some of the most powerful images of the Vietnam War. 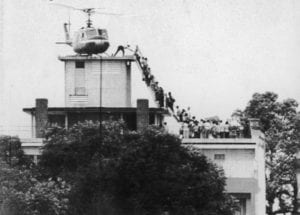 The day after the evacuation, the North Vietnamese Army invaded the city. In a moment of intense symbolism, a North Vietnamese tank drove through the front gates of the presidential palace — a moment that marked the official end of the Vietnam War.

I had heard that it was possible to visit the rooftop, now a residential apartment building, by offering the security guard in the lobby a small monetary incentive to use the elevator. I managed to find the address and walked inside.

Thankfully, the young man on duty that day knew why I was there; he quickly pulled out his phone and pulled up the famous photo and pointed upwards toward the roof. I nodded in agreement, and he told me the price of admission: 50,000 Vietnamese Dong. Having only recently arrived in the country, I was still a novice at converting their currency to mine. I was initially shocked at the price, but, after some quick math, I realized that he was asking for $2.13. I happily paid him, and he led me to the elevator, hit the button for the ninth floor, and walked away. After a short elevator ride later, I stepped outside into a place frozen in time. 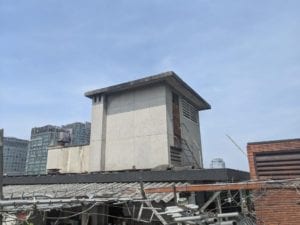 There was something eerie about being on the rooftop. Very little has changed since the photograph was taken 45 years ago, but the place is now layered with symbolism. For the Vietnamese victors, the rooftop symbolizes the final retreat of the most powerful military force on earth. It also is the place where the Vietnam War came to an end and the reunification of North and South Vietnam began. In many ways, modern Vietnamese history began here.

For Americans, this place and the famous photograph represent the futility of American involvement in Vietnam. Over 58,000 American soldiers lost their lives in a project that ultimately culminated in a panicked evacuation from this Saigon rooftop.

In yet another reminder that the march of progress never ceases, 22 Gia Long Street has become an extremely valuable piece of real estate in modern Saigon. Surrounded by several glass skyscrapers, it is likely going to be torn down in the near future to make way for whatever comes next. I feel lucky that I was able to visit the spot before it’s lost forever.