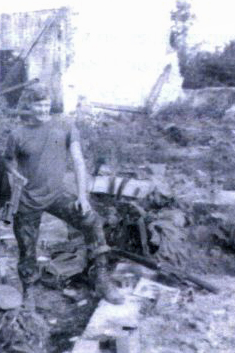 Paul W. Handerhan was born on August 30, 1948, to Clifford and Eileen Handerhan, in Perth Amboy, NJ. His home of record is Fords, NJ. He had two older brothers, Clifford and Gary, and one younger sister, Lynn.

Paul loved fishing and hunting. He also loved shooting and trapping muskrats. He and a group of his friends played in a rock-and-roll band in their basements. Paul was a student at John F. Kennedy Memorial High School, while his three siblings attended a Catholic high school. Paul loved playing sports. He was on the school's varsity football and track teams. As a wide receiver on the football team, Paul helped lead JFK to an undefeated season in 1967.

A year after high school graduation, Paul decided to follow in the footsteps of his brothers. Both were in the US Marines and had served in the Korean War. He enlisted on November 4, 1968. Neither of his parents liked the idea of him signing up, but his father was happy that he had plans for his future.

Handerhan received his basic training at Parris Island, SC, and at Camp LeJeune, NC. He went on to additional training at Airborne Parachute School at Fort Benning, GA. From there he was sent to Vietnam in August 1969 and attained the rank of Lance Corporal (LCPL).

Handerhan was killed in action on April 25, 1970. He was posthumously awarded the Military Merit Medal and the Gallantry Cross by the Republic of Vietnam. He is buried at Saint Gertrude's Roman Catholic Cemetery.

Be the first to add a remembrance for PAUL W HANDERHAN