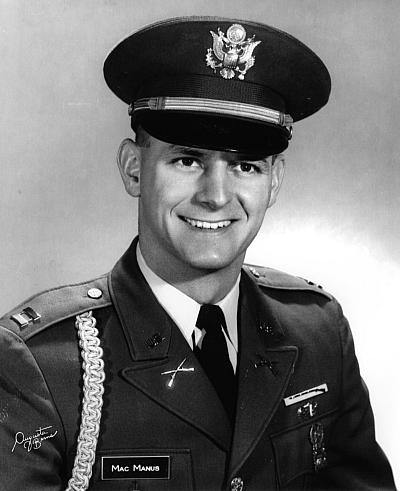 Colin D. MacManus was born on August 29, 1941 to Mrs. Barbara MacManus in Elizabeth, NJ. He lived in New York and Quincy, MA before moving to Newark, NJ. He graduated from South Side High School in 1959. He attended Rutgers University and graduated in 1963 with a bachelor's degree in sociology and an award as a distinguished military student. While he was an undergraduate, he was a member of the university's track team, and Scabbard and Blade, an ROTC honor society.

Following graduation, the captain attended Paratroop and Ranger schools at Fort Benning, Georgia. He was then stationed with the 3rd Armored Division "Spearheaders" in Frankfurt, Germany. While there, his mother explained, Captain MacManus led the rifle team representing the United States at the 1965 Central Treaty Organization games in Istanbul, Turkey. The squad finished second in the contest and received special honors from the U.S. commander.

In a February 22, 1967 article from the Newark Evening News his brother, John, stated "Colin was always very proud of the work he was doing. When we tried to sway him from volunteering from combat duty, he simply said that he had the training necessary to do the job--the type of training 'those young boys' with fear written on their faces didn't have."

MacManus was planning to marry Linda Neeson, the secretary of his commanding officer in Germany. The couple postponed their plans when he received his orders to report to Vietnam.

He entered the US Army from Newark, NJ and attained the rank of Captain (CAPT).

MacManus was killed in action on February 16, 1967 at the age of 25. He was serving with C Company, 1st Battalion, 22 Infantry, 4th Infantry Division.

Captain McManus's mother stated that her son wrote in his last letter that he was going out in the boondocks and had just reached his goal of being named a company commander, and that he would be unable to write for a while. His mother said that he never mentioned the fighting at all. He received a full military funeral.

There is a memorial at Rutgers University in New Brunswick, NJ dedicated to the graduates who were killed or missing in action from the Vietnam War. MacManus' name is listed among those killed in action.

Be the first to add a remembrance for COLIN D MACMANUS