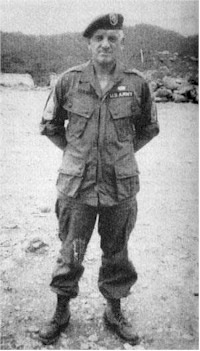 Gabriel R. Alamo was born on November 18, 1918, in Newark, NJ.  His home of record is Lyndhurst, NJ.  He had three brothers, Emil, Paul and Robert, and two sisters, Dorothy and Lena.  He was a graduate of Barringer High School.  Gabriel, and his wife, Edna, had three children, Deborah, Michael and Gabriel.  A fourth child was born after his death.

Gabriel Alamo enlisted in the US Army before WWII where he served with the 82nd Airborne Division as a paratrooper.  He later served in the Korean War.  His tours of duty included three years in Germany and two years in Japan. He attained the rank of Master Sergeant (MSGT/E8).  In 1950, Alamo graduated from the Chemical Corps School having taken classes in Intelligence, Chemical Agents, Biological Warfare and Radiological Defense among others.

While stationed at Fort Bragg, NC, Alamo volunteered for overseas duty with the Special Forces in Vietnam.

On July 6, 1964, Alamo was killed in action in South Vietnam in a battle near Nam Dong.  Alamo was one of two American Special Forces men killed in a battle with the communist Viet Cong during the defense of a Central Highlands Special Forces Camp.  Alamo remained at his post to lob flare shells from a mortar, providing continuous illumination on advancing Viet Cong guerillas until five grenades exploded inside his defenders' pit and he was killed.  He had been in Vietnam for only six weeks.

Besides his wife, children and siblings, he was survived by his father, August.

Alamo was posthumously awarded the Purple Heart and the Distinguished Service Cross for extraordinary service in action.  His Distinguished Service citation reads:
Master Sergeant Gabriel R. Alamo distinguished himself by extraordinary heroism in connection with military operation involving an opposing armed force in the Republic of Vietnam on 6 July 1964.  As a Team Sergeant, serving with the United States Army Special Forces Detachment A-726 at Camp Nam Dong, Sergeant Alamo displayed bravery, fortitude, and perseverance when a reinforced Viet Cong battalion suddenly launched a full scale, predawn attack on the Camp.  During the violent battle that ensued, lasting five hours and resulting in heavy casualties on both sides, he participated with outstanding effectiveness in defending the installation.  Upon the initial onslaught, he promptly directed a radio operator to transmit a message requesting support, and then rushed into a blazing building to assist in the removal of weapons and ammunition.  Ignoring the burns he received while in the burning structure, he then ran through a hail of enemy gunfire to a 60mm mortar position and set the weapon for firing.  As he noticed the enemy attempting to breach the main gate, he again dashed through a heavy volume of automatic weapons fire to abort a hostile action.  Although he sustained a serious wound in this courageous action, he demonstrated superhuman effort, reached the gate, and prevented entry of enemy troops.  Despite his wounds and the intense grenade attack, he reached the 60 mm mortar pit, refused evacuation for medical treatment, and directed the fires of the 60 mm mortar while simultaneously manning a 57 mm recoilless rifle.  Undaunted by the vicious enemy assault, he remained at his battle position and defended the camp until mortally wounded by the enemy.  Sergeant Alamo's valiant efforts and extraordinary heroic actions are in the highest traditions of the United States Army and reflect great credit upon himself and the military service.

Be the first to add a remembrance for GABRIEL R ALAMO