William Cornelius Ryan, Jr. was born on April 24, 1944, in Hoboken, NJ. His home of record is Bogota, NJ. Ryan was a halfback for St. Cecilia's football team.

After graduating from Saint Francis College in 1966, he enlisted in the US Marine Corps and was sent to naval flight training school in Pensacola, FL, where he earned his wings. He was awarded the gold wings of a Naval Flight Officer. He attained the rank of First Lieutenant (1LT).

In August 1968, Ryan received his orders for Vietnam. He was listed as missing in action on May 11, 1969, when his aircraft was shot down.

He flew over 300 combat missions and was awarded the Distinguished Flying Cross and numerous Strike/Flight Air Medals.

Synopsis (from the POW Network) as to the circumstances behind being listed as MIA:
Ryan was shot down over Laos, Savannakhet Province, on May 11, 1969, when he was piloting an aircraft that received hostile ground fire. He is listed as missing in action. Remnants of his plane and unopened parachute were excavated in 1993.

The following is an excerpt from The Record about William Ryan dated Monday, January 29, 1973:

Lt. William C. Ryan, Jr.'s plane was shot down in February of 1969, but he was picked up after three hours in the Gulf of Tonkin, his wife, Judy, said at the time.
As a Marine pilot, Lt. Ryan, 25, had flown more than 250 missions in F4 Phantom jets. He won 15 Air Medals, the Distinguished Flying Cross, and the Navy Commendation Medal.
As a halfback on St. Cecilia's football team in Englewood, Ryan scored 30 points in 1961, and during the basketball season, he scored 239 points as a member of that team. He won't be forgotten at St. Cecilia's. The school ha a Lt. William C. Ryan Memorial Award for student athletes.
When enemy ground fire shot him down in May 1969 he was not rescued. When his wife was notified, she said, "He was scheduled for rest leave tomorrow."

Be the first to add a remembrance for WILLIAM C RYAN 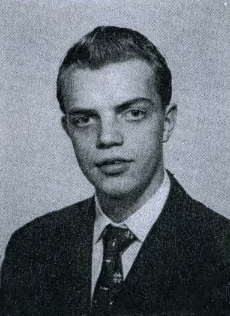