Julius Zaporozec was born in West Germany to Mr. and Mrs. Ilija Zaporozec on October 14, 1948. Two years later, his family relocated to Great Meadows, NJ. During the latter part of the 1960s, Julius and his family moved to Hackettstown, NJ.

Following graduation from Hackettstown High School in 1967, Julius attended Bethany College in Linsburg, KS, for one year. After returning home to NJ, Julius was employed by the Bergen Tool and Machine Company in Hackettstown.

Zaporozec entered the US Army in April 1969, and completed his basic training at Fort Dix, NJ. He was then stationed in Okinawa, Japan, before officially beginning his tour of duty in Vietnam on October 6, 1969. He served with 2nd Platoon, H Company, 75th Infantry, 1st Air Calvary Division (Air Mobile). He attained the rank of Specialist 4 (SP4).

Zaporozec was killed in action on November 17, 1969, in the Phouc Long Province, South Vietnam, when he suffered multiple fragmentation wounds from hostile ground fire. He was on a long-range recon patrol when his team encountered an enemy force. This battle can be researched in Acceptable Loss by Kregg P.J. Jorgenson. Jorgenson was a fellow team member.

His Silver Star citation reads:
For gallantry in action while engaged in military operations involving conflict with an armed hostile force in the Republic of Vietnam, Pfc. Zaporozec distinguished himself by exceptionally valorous action on Nov. 17, 1969, while serving as rear scout with Company H, (Ranger), 75th Infantry (Airborne), during a long range patrol in Phuoc Long Province, Republic of Vietnam. While monitoring a heavy used trail, the patrol became engaged by a numerically superior enemy force, firing automatic weapons and rockets.

Pfc. Zaporozec, observing the insurgents attempt to encircle the patrol, repeatedly exposed himself to intense hostile fire while moving from position to position to counter the enemy's attack. The assistant patrol leader was wounded and PFC. Zaporozec, with complete disregard for his own safety, attempted to move to his comrade's aid, killing two of the insurgents with devastating fire. While attempting to reach the assistant patrol leader, Pfc. Zaporozec was mortally wounded by the intense return fire. His gallant action was in keeping with the highest traditions of the military service, and reflects great credit upon himself, his unit, and the United States Army.

His Bronze Star citation reads:
Distinguishing himself by outstanding Meritorious service in connection with ground actions against a hostile force in the Republic of Vietnam during the period of October 7 to October 17, 1969. Through his untiring efforts and professional ability, he consistently obtained outstanding results. He was quick to grasp the implications of new problems with which he was faced as result of the ever-changing situations inherent in a counterinsurgency operation and to find ways and means to solve those problems. The energetic application of his extensive knowledge has materially contributed to the efforts of the United States mission to the Republic of Vietnam to assist that country in ridding itself of the communist threat to its freedom. His initiative, zeal, sound judgment and devotion to duty have been in the highest tradition of the United States Army and reflect great credit on himself, his unit and his military service.

His Air Medal citation reads:
Distinguishing himself by Meritorious achievements while participating in sustained aerial flight in support of combat ground forces of the Republic of Vietnam during the period of October 7 to November 17, 1969. During this time he actively participated in more than twenty-five aerial missions over hostile territory in support of counterinsurgency operations. During all of these missions he displayed the highest order of air discipline and acted in accordance with the best traditions of the service. By his determination to accomplish his mission in spite of the hazards inherent in repeated aerial flights over hostile territory and by his outstanding example of professionalism and devotion to duty, he has brought credit upon himself, his organization and the military service.

Be the first to add a remembrance for JULIUS ZAPOROZEC 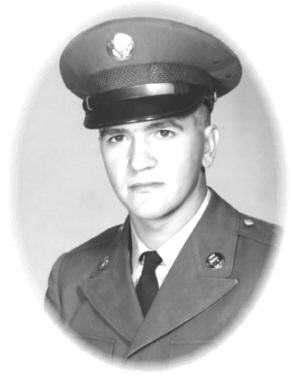