John W. Lupu was born on October 17, 1947 to Mr. John and Betty Lupu. His home of record is Middlesex, NJ. He had one brother named Raymond. He attended Middlesex High School and was an avid football player. He was the punter and running back. He graduated in 1966.

He served in the US Army and attained the rank of Sergeant (SGT). He was in Company B, end Battalion, 8th Cavalry, 1st Cavalry Division (Airmobile). He took his basic training in Fort Knox, KY and received airborne training in Fort Benning, GA. Upon graduation from paratrooper school, he was assigned to the 9th Airborne Division in Germany. He was transferred to the 173rd Airborne Brigade in Vietnam. After being wounded he was transferred to the 18th Engineer Brigade in Vietnam. He was again wounded and transferred to a base hospital in Tokyo, Japan for recovery. He was then sent back to Vietnam and in May 1969, he returned to the United States for 30 days recuperation. He volunteered for a second tour of duty and returned to Vietnam on June 25, 1969.

Lupu was killed in action on September 25, 1969 in Province of Tay Ninh, Vietnam. He is buried in Bound Brook, New Jersey. He received the Purple Heart, the Bronze Star, the Bronze Start with a First Oak Leaf Cluster, and the Air Medal.

Bronze Star Medal awarded posthumously citation:
"For distinguishing himself by outstanding meritorious service in connection with ground operations against a hostile force in the Republic of Vietnam during the period June 1968 to September 1969 through his untiring efforts and professional ability, he consistently obtained outstanding results. He was quick to grasp the implications of new problems with which he was faced as a result of the ever-changing situations inherent in a counterinsurgency operation and to find ways and means to solve those problems. The energetic application of his extensive knowledge has materially contributed to the efforts of the United States mission to the Republic of Vietnam to assist that country in ridding itself of the communist threat to its freedom. His initiative, zeal, sound judgment and devotion to duty have been in the highest tradition of the United States Army and reflects great credit on himself, his unit and the military service."

Bronze Star Medal (First Oak Leaf Cluster) with "V" Device awarded posthumously citation:
"For heroism, not involving participation in aerial flight, in connection with military operations against hostile force in the Republic of Vietnam. Specialist Four Lupu distinguished himself by exceptionally valorous action on 13 September 1969, while serving as rifleman with Company B, 2d Battalion (Airmobile), 8th Cavalry during reconnaissance mission in Tay Ninh Province, Republic of Vietnam. As Company B was moving through thick jungle, they were engaged by an unknown sized enemy element, well concealed and employing small arms, automatic weapons and rockets. During the initial contact several members of the point element were wounded. As two members of the point element moved to the right of the lead file, Specialist Four Lupu moved left in order to coordinate a concentrated cross fire on the enemy positions. Moving under intense enemy fire, he gained a position from which he could place effective fire on the enemy position. Largely due to his action the enemy was pinned down and Company B was able to evacuate its wounded personnel quickly and efficiently, while inflicting a decisive defeat to the enemy element. His display of personal bravery and devotion to duty was in keeping with the highest traditions of the military service, and reflects great credit upon himself, his unit, and the United States Army."

Air Medal Presented posthumously citation:
"For distinguishing himself by outstanding meritorious achievement while participating in sustained aerial flight in support of combat ground forces of the Republic of Vietnam during the period 16 June 1968 to 25 September 1969. During this time he actively participated in more than twenty-five aerial missions over hostile territory in support of counterinsurgency operations. During all of these missions he displayed the highest order of air discipline and acted in accordance with the best traditions of the service. By his determination to accomplish his mission in spite of the hazards inherent in repeated aerial flights over hostile territory and by his outstanding degree of professionalism and devotion to duty, he has brought credit upon himself, his organization, and the military service."

Middlesex High School honored John and three other soldiers with four pastel portraits hanging on the wall. The other servicemen honored were Pfc. Thomas Simchock, Lance Corporal Walter J. Weiss and Lt. J.G. Paul Charles Schmidt. The memorial project was led by former student John Voorhees and was sponsored by the Middlesex High School's Honor Society. The pastel portraits were painted by artist Joan Nardoxxi. Each and every year on the first and last day of school the American flag flies at half staff in the memory of the four soldiers. The New York Times wrote an article "In Memory of 4 Young Men, a Mask of Frivolity Comes Off" on May 25, 1986 about the dedication of the high school hallway. The American Legion Post was dedicated to John and is now called the John W. Lupu Memorial Post #306.

Be the first to add a remembrance for JOHN W LUPU 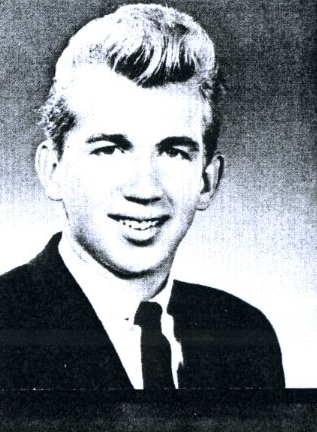