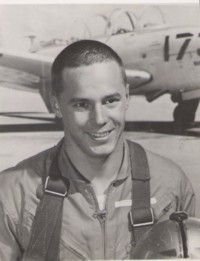 Lester A. Wesighan was born on April 22, 1941, to Lester and Wilma Wesighan. He had two sisters and several half siblings. His home of record is Vernon, NJ. He graduated from Franklin High School in 1959. He enjoyed writing. After high school, he took some college courses in New York and New Jersey. He had a newspaper job lined up after his tour of duty in Vietnam.

Wesighan was killed in action on March 4, 1966, when he was shot while looking after another wounded Marine. He was serving with the 3rd Marine Division against hostile forces near Quang Hgai. He is buried in Arlington National Cemetery.

Wesighan was awarded the Military Merit Medal, the Gallantry Cross with Palm, the Purple Heart, the National Defense Service Medal and the Vietnam Service Medal.

Treasured by his family is the following, almost a parting message, written by Lester Wesighan before his death:

Oh yes, I go where men lose their souls and lovers their beloved.
Oh yes, fate's hand may touch my cheek and chain my destiny.
But sorrow not when I depart and hasten to that pit, where sword meets sword and loss is great.
For there my name is carved upon a wall.

My heart does long to sever free, an evil head from bodies racked with pain.
So sob not beloved and smile with pride, as I depart with hope and promise of return.
That day will be when life can freely flow, and now my heart goes to bring that hour closer.

Be the first to add a remembrance for LESTER A WESIGHAN