Nelson Omar Van Houten was born on January 18, 1946, and lived in Paterson, NJ.  He entered the US Army where he attained the rank of Private First Class (PFC/E3).

Van Houten was assigned to the 101st Airborne Division and began his tour of duty in Vietnam on January 17, 1969.

On April 13, 1969, Van Houten was killed as a result of multiple fragmentation wounds in Thua Thien Province, South Vietnam. He is buried at Laurel Grove Memorial Park in Totowa, NJ. 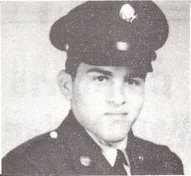