Paul Flaherty was born October 17, 1948, to Francis and Lora Flaherty.  He grew up in a loving family with his sister, Carolyn, and younger brother, Dennis.  Paul was the peacemaker of the family, always watching out for others.  Once when Carolyn got into a minor car accident, Paul told his mother, "not to holler at her."  Although everyone knew Paul as a peacemaker, he did enjoy teasing his little brother.  He also liked going to Dennis' basketball games.  He was proud of him!

Paul was a good natured, happy-go-lucky kid and enjoyed his years at St. Mary's Grammar School in Gloucester.  He graduated from Gloucester High School in 1967.  While in school, he enjoyed sports, participating in baseball, basketball, and football.  He was also involved in the Interact Club.  Paul loved music and especially liked listening to the songs of Frankie Valli and the Four Seasons.  Can't Take my Eyes Off of You was one of his favorite tunes.

After graduation, Paul worked at the Campbell Soup Company.  He worked hard and was able to save enough money to buy a much-wanted car, a 1964 Ford Falcon.

Paul was inducted into the US Army in June 1968.  He attained the rank of Private First Class (PFC).  There was no doubt in his mind that this was "the right thing to do" for his country, even though he felt he wouldn't be able to kill anyone.  He went through basic training at Fort Dix, NJ and then went on to Fort Polk, LA.  By being sent to Louisiana, where it was hot and humid, there was no doubt in his mind where he would be going.  On November 5, 1968, Paul left for Vietnam from San Diego, CA.  He didn't show his nervousness.  He stayed strong for all those who loved him.

While on patrol on December 3, 1968, Flaherty was wounded by shrapnel from an exploding landmine and spent two weeks in the hospital.  Upon his recovery, he was returned to duty.

On January 7, 1969, Flaherty was serving as a machine gunner with his unit on an ambush patrol.  They were suddenly subjected to intense mortar fire, grenades, and small arms fire.  While placing a barrage of machine gun fire on the aggressors, Paul was fatally wounded by shrapnel from an exploding mortar.  Paul had been in Vietnam for two months at the time of his death.  He was 20 years old.

Paul was awarded seven medals and citations.  Among those medals were two Purple Hearts, the Bronze Star with a "V" for valor, and a Sharp Shooter Medal.

Be the first to add a remembrance for PAUL J FLAHERTY 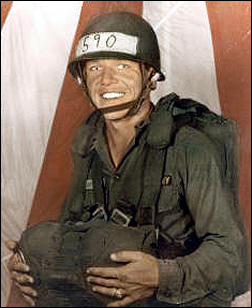