Charles Fairfchild Godfrey was born on March 20, 1945. His home of record is Toms River, NJ. He attended Toms River High School and graduated in 1963. His high school yearbook, Cedar Chest 63, states that "Charlie" was a college prep student who enjoyed swimming, boating and reading. He participated in the Photo, Bowling and History clubs and played football in his freshman year.

Godfrey attended Monmouth College. After graduation, he enlisted in the US Army. He served in the US Army and attained the rank of Specialist 4 (SP4). His tour of duty began on September 28, 1969.

Godfrey was serving as an Army Intelligence Analyst when he was killed in a helicopter crash, caused by hostile fire, in Quang Tri Province, South Vietnam on January 1, 1970. He was 24. Godfrey was serving with the 5th Infantry Division, 1st Brigade.

Godfrey was survived by his spouse, Anita, a daughter, Marta, and his mother and stepfather, Janet and Sam Sangi.

He is one of six graduates remembered in an outdoor Vietnam Memorial dedicated at Toms River High School South, the original high school in Dover Township.

Be the first to add a remembrance for CHARLES F GODFREY 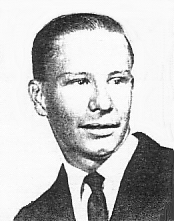