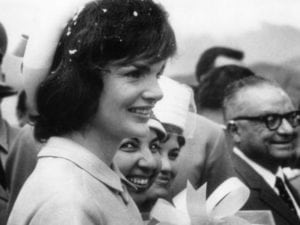 She was a Kennedy. She was an Onassis. She did not define herself by her husbands.

Her enduring legacy would be the force of nature that was Jacqueline!

As a young mother she was catapulted onto the world stage when her husband John F. Kennedy became the 35th President of the United States. She quickly observed that America’s rich cultural and architectural past was being destroyed in the name of progress. Realizing that future generations would need the insights of the past for guidance, Jacqueline embarked upon a series of preservation efforts: first the White House, then Lafayette Square in Washington, D.C, and eventually Grand Central Station in NYC. Such preservation efforts galvanized the rest of the country to protect its historic monuments. Aided by her public profile, her work helped bring about the Historic Preservation Act of 1966: the most far-reaching preservation legislation ever enacted in the United States.

Meet Jacqueline! A great American icon who wore many hats, not just her pillbox.

Jill Lawrence brings the woman we now know as Jackie O’ to life by interpreting her tireless efforts for the public good. By conveying Jacqueline’s personal and professional struggles and victories, a poignant portrait of the First Lady, wife, mother, and activist vividly comes alive. By bringing historic preservation center stage, Jacqueline’s gift for the future was to preserve the past.

She earned her BFA with honors in Musical Theater from the University of the Arts in Philadelphia and her high school diploma from the North Carolina School of the Arts in Winston-Salem. She has performed with the Ziggaraut Theater in Los Angeles, The Pennsylvania Renaissance Faire, American Family Theaters and The Philadelphia Shakespeare Festival, just to name a few. For many years she welcomed visitors from all over the world as Betsy Ross at the Betsy Ross house. Jill has been an adjunct professor at Camden County College, a writer and tour guide for Once Upon A Nation and a guest storyteller at the National Archives in Washington. Like Jackie Onassis, Jill’s favorite role is being Mommy to her daughter and son

This program is free and funded by the New Jersey Council for the Humanities.