Music of the Vietnam Era Experience 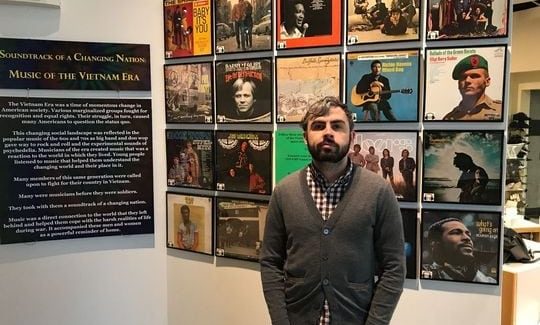 There is no greater way to teach the Vietnam Era then through the music of the time. This latest addition to our educational offerings coincides with the 2018 Music of the Era with a uniquely New Jersey perspective exhibit. Students will be assigned one of the carefully curated songs and be asked to match it with an artifact or photo in the museum. They will then post their connection on our instagram page @njvvmf. Students need access to their cell phones and headphones to participate. They will NOT be required to utilize their data plans as they will have access to our wi-fi connection.

How does the popular music of the Vietnam Era reflect the diverse attitudes of the American public and connect with the history of the time?

Students will be able to identify and justify connections between particular songs and historical events, attitudes, and or historical figures.

Frankie Boyce of Plainfield wrote the lyrics to “Soul Soldier” in November of 1968 while he was serving in Vietnam.

Two months later he made the ultimate sacrifice. The tale of Boyce, who had backed an early version of the Rock and Roll Hall of Fame bound Parliament Funkadelic before he entered the service, is one of the stories you’ll find in our new exhibit, “Soundtrack of a Changing Nation: Music of the Vietnam Era.”

“When Frankie died, they sent his belongings home and on a dirty piece of paper he had written the lyrics to ‘Soul Soldier,’ and I can truthfully say that was the last song we ended up writing together,” said brother Richard Boyce, who served stateside during the war.

The Boyce story details one Jersey soldier’s connection to a  Jersey Rock and Roll Hall of Fame band. There are several Vietnam War connections to Bruce Springsteen and the E Street Band, who are also in the Rock Hall.

The exhibit includes tributes to Walter Cichon, the lead singer of the Jersey Shore based the Motifs, who was an inspiration for a teenage Springsteen. Cichon was killed in the war, as was Bart Haynes of Freehold, the drummer for Springsteen’s former band, the Castilies.

“Walter Cichon was another story entirely,” Springsteen said. “The longest hair on man or beast I’d ever seen. The first true star I’d  ever been close to. A full-blooded rock ‘n’ roll animal with the attitude, the sexuality, the toughness, the raw sensuality pouring out of him, scaring and thrilling all of us who came in contact with him.”

Springsteen wrote the song “The Wall” after visiting the Vietnam Veterans Memorial in Washington, D.C., and finding  Cichon’s name there. He speaks of Cichon, Haynes and the Vietnam War each night in the hit “Springsteen on Broadway” at the Walker Kerr Theatre.

The exhibit, on display in the museum part of the Memorial, includes Cichon’s handwritten lyrics for the Motif’s song “Molly,” a letter he wrote home five days before he went missing and a letter of condolence to the Cichon family from President Gerald Ford.

The exhibit also highlights the Electrical Banana, a group of MPs who played for the troops while in Vietnam. The band included Mike Ioli, originally from Ridgefield Park and a current Ocean Township resident. Ioli is a guide at the Memorial.

There are contrasting items in the Holmdel exhibit, a pair of sandals of the era with combat boots, a floppy leather cap with a helmet. Posters from Convention Hall show who was playing in Asbury Park at the time of the war. A soundtrack of the era’s music is played for visitors through the museum web site, available to those who are on the grounds.