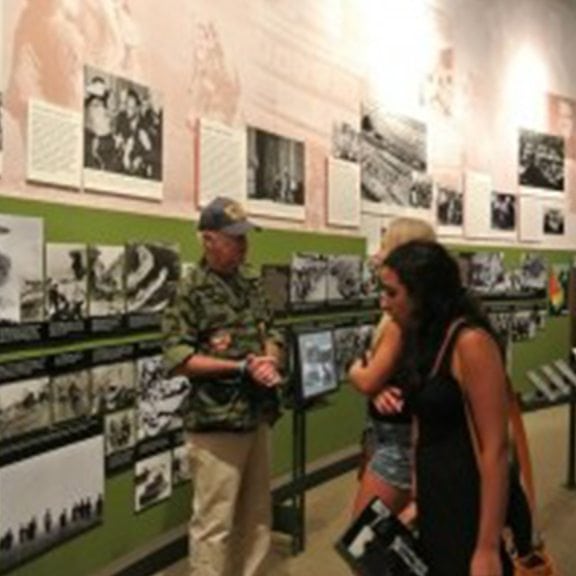 AN INVITATION TO FAMILIES TO EXPERIENCE HISTORY WITH THOSE WHO LIVED IT FREE WALKING TOURS OF THE NJ VIETNAM VETERANS MUSEUM & MEMORIAL, SATURDAY, JULY 5, 11 A.M. AND 1 P.M.

Independence Day 2014 has arrived. Like many of you, I’ll be getting together with family and friends and posting pictures of the food, festivities and fireworks. Like most millennials, I will share every moment on SnapChat, Instagram and Facebook. As you’re caught up in all the social networking, consider the significance of the holiday beyond the images of flags, fireworks and barbecues. Do you fully grasp the sacrifices made by those who fought for our freedoms?

The Fourth of July is a day for us to enjoy time with the family, but, most importantly, it’s time to celebrate our independence and remember those who defend it. I was reminded of this when I toured the New Jersey Vietnam Veterans’ Memorial and the Vietnam Era Museum a few weeks ago.

On July 5, after all the hotdogs and burgers have been eaten and fireworks have gone off, the New Jersey Vietnam Veterans’ Memorial Foundation invites you to attend a free walking tour of its Memorial. Starting in the Museum’s lobby at 11 a.m., Vietnam Veteran tour guides will share their personal experiences to help you gain a better understanding and appreciation of the sacrifices made by the men and women who served and continue to serve our country. Each tour lasts about an hour (tours meet in the lobby at 11 a.m. and 12 p.m.) Those of you in your teens and twenties will appreciate the guides’commentary because many of them were your age when they enlisted or were drafted into the Vietnam War.

The video testimonials, personal letters, and photographs hit home for me as I toured the Museum. I was especially touched by the letters of the young men to their families. Like me, they were eager to start the next chapter of their lives, but instead many of their lives were cut short, never returning home. Others, continue to live their lives carrying the visible and invisible scars of their service.

In the Museum’s Testimony Theater, some of these returning soldiers share the impact Vietnam had on their lives. Robert Clarke stated, “I was drafted at 22. When I left Vietnam at 24, I felt like I was 30.” George Zaraycki explains his excitement while sitting in the window seat of a 747 Jet on his way to the front line. As he looked over at the “beautiful range of greens” layering the Vietnam jungles, he contemplated what would come next for him. However, mixed opinions overcame the thoughts of many U.S. soldiers. Tom Conti explains how the climate and environment instantly had a negative effect on his tour of duty. “I went from a 72 degree, climate controlled plane to a wall of humidity and 115 degrees,” he described. “The smell was overpowering, like being in a garbage can.”

You will also see a fully restored 1964 Bell UH1- Huey helicopter – the icon of the Vietnam War. Equipped with a sound system and installed as if in flight at the Museum’s entrance, the Huey starts your visit. Its sight and sounds are impressive; you can easily imagine the relief the sounds of the rotor blades brought to soldiers on the ground, knowing that soon they would be transported out of danger.

This July 4th, let’s mark the beginning of a new tradition. Visit the Vietnam Era Museum and the New Jersey Vietnam Veterans’ Memorial and thank those who fought and continue to fight for the freedoms we celebrate. Instead of posting a picture of fireworks, consider sharing a picture of you posing with your tour guide next to a Huey helicopter and truly thanking a Veteran for his/her service.

Free tours of the Memorial and Museum are held on the first Saturday of every month. Visit www.njvvmf.org for more information and directions.