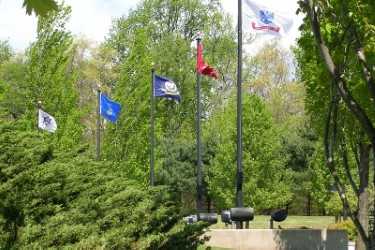 Today we celebrate Armed Forces Day! Although our United States Armed Services are divided into multiple branches, we should all take the time to appreciate the unified strength of our Armed Forces.

In his Proclamation Truman said “I call upon my fellow citizens to display the flag of the United States at their homes on Armed Forces Day and to participate in exercises expressive of our recognition of skill, gallantry, and uncompromising devotion to duty characteristic of the Armed Forces in the carrying out of their missions”

Honoring all of the branches is a critical element of the design of the New Jersey Vietnam Veterans’ Memorial. At the base of our Memorial are flag representing all of the branches which served in Vietnam. The flags from left to right are the flag of the United States Army, Navy, Marine Corps, Air Force and the Coast Guard. The order of the flags is not by the date of creation but by the casualty total. According, to research complied by the National Archives with the Department of Defense. The Army suffered the most casualties during the Vietnam Era with 38,224. The Marines, 14,884 men, the Navy at 2,559, The Air Force at 2,586. The US Coast Guard has the least number of casualties with 7. The Coast Guard’s involvement in Vietnam is little known. President Johnson called them up for deployment and they served in combat and support positions in the Gulf of Tonkin and beyond.

In 1961 John F. Kennedy declared Armed Forces Day a national holiday. It is not a federal holiday therefore many of the nation’s military bases are open and hold activities on the day. The New Jersey Vietnam Veterans’ Memorial is open 24-7, for visitors. We host free guided tours of the Memorial every Saturday at 11am and 2pm and today is no different. Today, like all other days we seek “to honor, to remember and to heal”

Keri A. Giannotti is our Museum Educator and a full time History teacher at Bloomfield High School in Bloomfield, New Jersey. If you have a topic or idea for an educationally related story contact her at kgiannotti@njvvmf.org