Architect of the Memorial 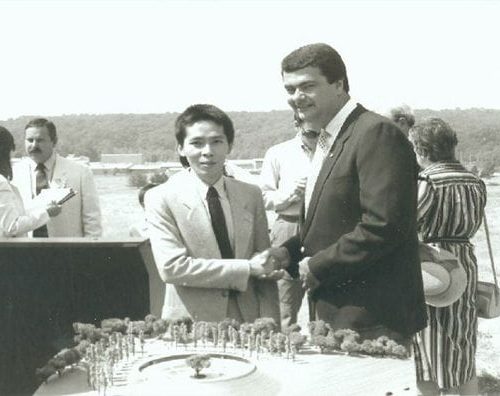 Hien Nguyen, a native of Vietnam, is the designer of the New Jersey Vietnam Veterans’ Memorial. He came to the United States as a college student in the last days of the war. He fled his homeland in 1975, days before the city of Saigon fell to the Communist forces from the North. His family was separated in the last frantic days, but was later reunited in the United States. Today Nguyen, a naturalized citizen, lives in Old Bridge, New Jersey.

After completing his education at Virginia Polytechnic Institute in 1980, Hguyen became an architect. His design for the open-air memorial was selected from over 400 submitted for consideration. The only requirements given to the architects for the memorial was that it must include the names of all those killed in action or listed as missing in action from New Jersey.

A quiet man who shies away from the limelight created the Memorial, Nguyen is committed to the memory of the soldiers who gave their lives for his homeland.

When Nguyen was awarded $5,000 from the selection of his design, he designated that the money be used to help the National League of POW-MIA Families and the Pearl S. Buck Foundation for Amerasian children.