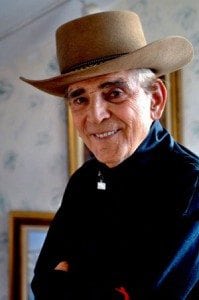 Gregory Perillo (1927- ) is a world renowned painter and sculptor best known for his ability to capture colorful chapters of American history through art. Perillo’s art has been featured in galleries across the world from the Museum of the North American Indian to the Moscow Kremlin. Most recently, Perillo has been commissioned by the Red Storm Drum and Dance Troop, a group representing 15 Native American nations, for a large sculpture at Fort Wadsworth, Staten Island, NY. The sculpture is set to be titled “The Native Americans.”

Raised in Staten Island, Perillo was the second child of Italian immigrants. Though his artistic talents were apparent from a young age, Perillo began formally studying art after serving for 2 years in the United States Navy during WWII. In 1947, Perillo returned to Staten Island. He married the love of his life, Mary Venitti and took advantage of the G.I. Bill. Perillo worked at a garment factory during the day, earning his G.E.D. at night. With Mary’s support, Perillo began his formal art training, attending The Pratt Institute, the Cartoonist’s Illustration School (later renamed The School of Visual Arts), and the Art Students League in New York. Perillo continued his education as the protégé of artist William Robinson Leigh from 1950 to 1955.

After Leigh’s artistic guidance, Perillo’s paintings began to sell and were featured in numerous galleries. By 1976, Perillo’s work gained a whole new level of popularity when his paintings were reproduced by Kern Collectibles. The high quality of his work was also recognized by American Express. In1990, the company commissioned Perillo to paint over 50 oil paintings and to construct two large bronze sculptures for their world headquarters in Phoenix, Arizona. Perillo’s connection to the military didn’t end with the completion of his tour. In the 1960’s Perillo witnessed an event that stayed with him for his entire life. While in New York City for a gallery show, Perillo happened upon a Vietnam Veteran and his family who were touring the city. The Veteran was being harassed by war protestors. Perillo was taken aback by the poor treatment of the Veteran and proceeded to defend him. Internalizing feelings of disgust about the situation, Perillo expressed his emotions through his art decades later.