On Thursday, June 9th employees from Home Depot gathered at the New Jersey Vietnam Veterans’ Memorial in order to give back to the Vietnam Veterans. The Home Depot employees paid tribute by planting colorful flowers around the property and washing The Memorial walls.  One of the core values of Home Depot is giving back to a community, whether that be fixing a children’s playground or washing the walls of a veteran’s memorial.

“I always enjoyed doing the Team Depot Projects with Home Depot.” John Poyhonen, an Operations Manager at Forked River said. “What started out as doing playgrounds for kids grew into doing things for VFW’s and memorials.”

This was a common theme that most of the Home Depot employees mentioned.  Many employees either had family members who served in Vietnam or realized the pain and suffering the Veterans went through during the war. There is also a small percentage of employees that just like to give back to the community in general.

“This is one of my favorite things the company does.” John continued.  “I have worked for other companies that did very little for people or the community.”

Home Depot has a value wheel that its employees use on a daily basis.  Values range from respecting each other to giving back. According to Tom Gally, a Pro Account Sales Representative from Harrisburg, Pennsylvania, employees at Home Depot hold the values on the wheel very sacred to them.  In order to work in the company, one needs to have a giving mentality.

Along with the orange apron-wearing everyday workers, many high-ranking employees such as store managers and regional vice presidents of Home Depot came out to lend a hand in sprucing up the memorial.

“How can you not want to help after seeing what they went through?” Lisa Corci, the Community Captain asked. “I want to give back because the soldiers risked their lives for us. It isn’t about just throwing money around, sometimes you have to do things like this.”

Among the employees giving back to The Memorial was Jennifer Hardy, the Regional Vice President of the New Jersey Metro area.  Although she had no ties to The Memorial or the Vietnam Era, her grandfather courageously served in World War II, which helped her understand what the Vietnam Veterans went through. Just like most of the employees, Jen believes in the core value of giving back.

“On a pretty regular basis, we volunteer time and work on projects. It is an annual tradition here at The Memorial.” Jennifer explained.

Many Home Depot employees choose to participate in the cleaning of The Memorial because they have personal ties to someone who served in the Vietnam War.  John Poyhonen has an uncle who served in Vietnam and survived. While Kim Vignola, the manager for Home Depot in Hazlet, had two uncles who served and survived.  Tom Gally did not know anyone personally who served in Vietnam, the closest was a man his father knew.  As a child, Tom remembered his father talking to a young man who had just found out he was going to serve in Vietnam.  The newly drafted soldier was scared and did not want to go.  Tom’s father tried to calm him down by explaining how everything was going to be alright.  Unfortunately, the man did not survive the war.  Due to their close ties to people who served in Vietnam, each of these employees knows what the Veterans went through while on their tour of duty along with the hardships they faced upon returning home.

The annual washing of The Memorial has been going on for around twelve years.  Dennis Beauregard, a member of the Vietnam Vets Chapter 12 in Oakhurst, NJ has been a key member in putting this event together. Dennis served in the Army Infantry from 1967 to 1968. Instead of serving a full year, Dennis was injured within four and a half months.  Due to this injury, Dennis spent seven months in Valley Forge Military Hospital in Pennsylvania for seven months. After those long months in the hospital, Dennis was honorably discharged.

“I have been a big veterans advocate since day one to fight for benefits that veterans deserve and receive now,” Dennis stated. “When we first came back, they didn’t want to know us, no one did.”

Dennis discussed how veterans of the Korean War and World War II began to respect Vietnam Veterans because they fought for them and went through the same troubles such as PTSD and Agent Orange. This led Dennis to advocate for all veterans along with his own from Vietnam. Dennis has been a big fan of what the New Jersey Vietnam Veterans’ Memorial Foundation has done to help preserve history and educate today’s youth about the era.

“I’ve been here since opening day,” Dennis stated.  “The thing is now to educate our youth.”

Dennis expressed his interest in the tours the foundation gives to school groups every year. After the Home Depot employees were done planting flowers and washing The Memorial, two Veteran Volunteers gave the Home Depot employees a tour of The Memorial and Vietnam Era Museum.  Although many employees have relatives who served in Vietnam, many know very little about the era. This tour gave them an opportunity to learn about the war and time period. 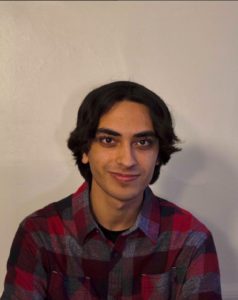 For most of my life I have known about the New Jersey Vietnam Veterans Memorial Foundation.  Countless times I have passed the memorial on the Garden State Parkway.  As a child my parents would bring me to the memorial time and again so I could learn more about the Vietnam Era, a period that is rarely taught in schools.  The NJVVMF is a local institution that I wanted to be a part of.

The most rewarding project I have done so far is photographing the Vietnam Veterans giving tours of the memorial and museum.  Each veteran has a unique story to share which makes each tour I shadow new and interesting.

Being a history major with a business minor, it is hard to blend the two together.  The NJVVMF has done an extraordinary job accomplishing this.  I am currently working with the marketing department helping them update their website and create content for their social media.  While working on the business end of the organization, I am still learning so much about the Vietnam Era by shadowing veteran tours and making history related content for social media.

My favorite part of the internship is spending time with the Vietnam Veterans.  Each of them have a unique story about the era which makes every tour they do fascinating.  With such great personalities, I walk into my internship everyday excited and unknowing about what is in store for me.

Before interning at the NJVVMF, I thought that many Vietnam Veterans shared the same view points.  After spending time with the veterans, I know I couldn’t have been more wrong.  The Vietnam Veterans have many different opinions based on the experiences they had during the era.