Getting to Know Kenneth Gurbisz

This is a series of spotlights on our Vietnam Veteran Tour Guides. These men are invaluable connections to the history of the Vietnam Era as they share their personal stories with our visitors.

Years Served in the Military: 3 years

I grew up in Bayonne, New Jersey as a member of a lower middle-class family. There were plenty of boys in our neighborhood, so there was always some kind of game being played. We stayed outside until dinner time and then after dinner until dark. I guess I had a little bit of wildness in me, and I did get in trouble in school.

I started a full-time job and started at Newark College of Engineering in the fall of 1966. I was taking four courses to qualify for a draft deferment and working full-time plus overtime. The grind finally got to me and in January 1968 I dropped a course which put me below the 12 credits needed, and it put me into the draft pool. It didn’t take long, and I was in the process to be drafted in March 1968. The Army recruiters contacted me and offered me a chance to be a pilot. I was raised in a family where my father and all my uncles served in WWII. It was considered an honor to serve your country. To this day I wonder if that had more to do with my decision to drop that course.

I served in Vietnam In the Central Highlands at a base called Camp Holloway in Plieku. Our base was close to the Cambodian and Laotian borders. 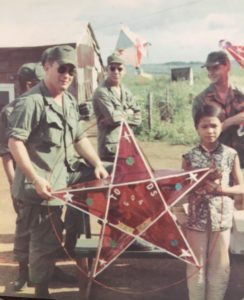 My main job was that of a recovery pilot. When a helicopter went down for whatever reason, I would fly there with a team of four soldiers who would  prepare the helicopter for extraction. On a few occasions it would be minor problem that one of the mechanics would fix, and I would fly it back while the other pilot would fly our ship back.

Shortly after arriving in Vietnam, I became the armament platoon leader as an additional responsibility. During the following couple months, I was trained to be a maintenance test pilot.

I would get up at 0600, shave and shower, have breakfast and then head for the hangar’s operations center. I would check to see if was scheduled for any flights to other bases, or test flights.  If not, I would head to the armament shop and continue my day there until I was needed to fly. There were always for things to do, and the days usually ended at dark.

One of my duties was the Civilian Relationships Officer. My company and another company took on a project to build a school. When the school was ready, we had a grand opening with a pinic for the kids. It included hot dogs and burgers, popcorn and corn on the cob. We served ice cream and soda. It was a great day and there were tons of smiles on their faces.

Jeff Roy was assigned to our unit late in my tour of the duty. He was a 1st lieutenant starting his second  tour in Vietnam. He was our only commissioned officer who was a pilot. He was knowledgeable and down-to-earth. We got along very well.

We were young, I was less than three years out of high school. Many of the infantry soldiers were even younger than me. We addressed all the challenges and dangers that we faced. We worked long days and sometimes longer nights. We did the job we were given without the support of our country.

My coming home was pretty much like everyone else’s. There were anti-war demonstrators at the airport. For the most part, they were trying to get the returning troops to react to their insults so the soldiers would be arrested. Other than that, it was indifference on the part of the people I grew up with.

I went back to my job as a lab technician and continued my education. I graduated from Newark College of Engineering with a degree in Industrial Engineering. I went to work at Public Service Gas and Electric and spent 27 years working in electric generating stations.

Like a lot of veterans, I didn’t talk much about Vietnam. I never even went to the Memorial, so I got in the car and went to see it.  I became hooked on the place. I sent my resume to the memorial and started training as a tour guide. That was in 2003, and I am still here.