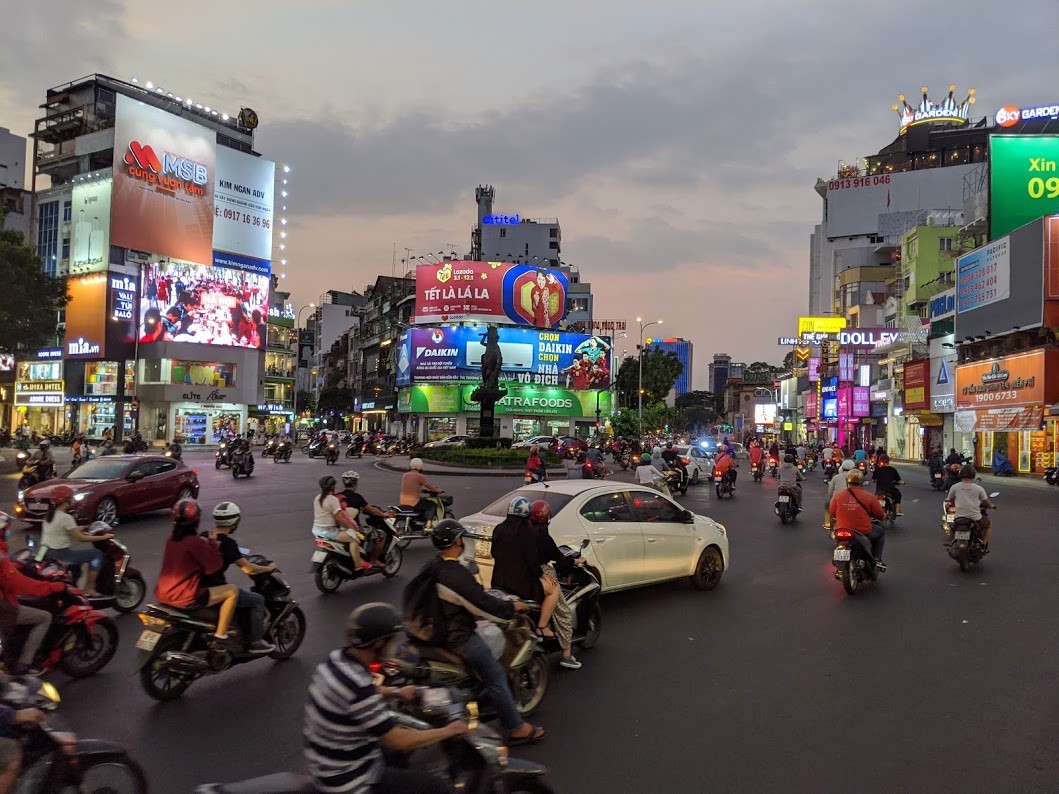 Chapter 3: The Tunnels at Cu Chi

96 degrees. Stifling jungle humidity. 10 feet underground. Claustrophobia begins to set in as I crawl forward on my hands and knees through the near total darkness, inching my way towards the harsh light of a single exposed lightbulb far off in the distance. 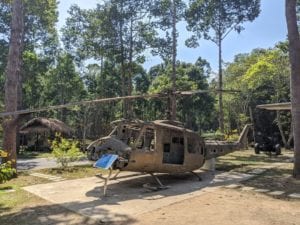 My shoulders are wide enough to brush up against both walls of the tunnel, and I have already hit my head on the roof several times as a crawl. I am thankful for the light, knowing that such a convenience wasn’t enjoyed by the men that navigated these tunnels during the war. Eventually I make my way to the far end and find that the path takes a sudden turn upwards. Craning my neck to look up, I see a framed rectangle of trees and sky – my escape hatch back to the surface.

About an hour drive from downtown Saigon, the Cu Chi Tunnels are a vast network of underground passageways that were created by the Vietcong and used extensively during the war. These narrow corridors allowed Vietcong soldiers to avoid American patrols and air support while also giving them a place to store weapons, food, and other supplies.

Well camouflaged entrances allowed the Vietcong to launch surprise attacks on American soldiers and then quickly disappear, seemingly into thin air. There were hundreds of miles of these tunnels throughout Vietnam during the war. Some of the larger tunnels were used as meeting areas, kitchens, and hospitals, complete with ventilation shafts and multiple entrances.

Upon arriving at the tunnel complex you are met with a collection of abandoned American military vehicles; a Huey helicopter in disrepair; an armored personnel carrier scarred with the marks of major explosions; a tank with its treads blown off. Perhaps most surprising of all, a large cargo plane dominates the space, parked there long enough for several large trees to grow up around it, trapping it in place. 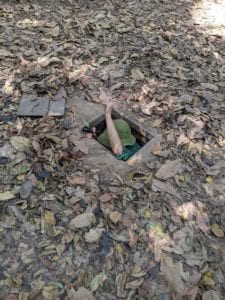 Camouflaged entrance to the Tunnels

After watching a short video about the history of the tunnels, we were led to a small opening in the jungle floor. During the war, American soldiers and Marines would occasionally discover tunnel entrances like this one and would be forced to decide what to do next. They could destroy the tunnels with explosives but would then lose the opportunity to gather intelligence or capture prisoners.

The other option – entering the tunnels – was full of unique challenges. The tunnels were designed to accommodate a Vietnamese man, on average much smaller than an average American. There was also no light underground and little room to defend yourself. The solution was often to send in the smallest soldier available, armed with just a flashlight and a pistol. These brave men became known as tunnel rats and they were some of the most respected soldiers that served in Vietnam. 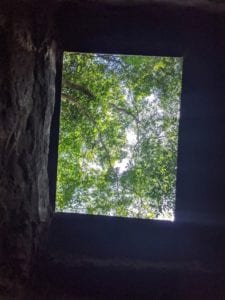 Tunnel entrance from below

The Cu Chi Tunnels are now a major attraction for travelers with several companies offering day trips from Saigon. I spent several hours exploring the tunnel complex with a guide and several other travelers. Our guide was recruited as a young man to join the South Vietnamese Army as a translator. He was sent to language school where he learned English and spent the rest of the war working with the United States Army at Long Binh. After the war, he was sent to a re-education camp for five years. He was a larger-than-life character who shared personal stories of his life during the war and his fond memories of working alongside his American allies. 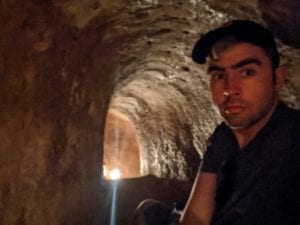 The most surreal aspect of my day exploring the tunnels at Cu Chi was the occasional sound of gunfire in the near distance. While the Vietnamese certainly use the tunnels to share their country’s history with visitors, they have also found creative ways to make money in the process. Next to the Cu Chi Tunnels is a firing range where tourists can shoot a wide variety of firearms, including M16s and AK-47s , weapons that were used extensively during the war. 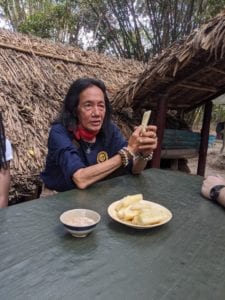 Our tour guide and former translator for the American military

Our group stopped by the range after visiting the tunnels, and several members of our group excitedly exchanged their money for bullets. I had no desire to participate and found the whole concept of the shooting range somewhat jarring. Perhaps I spend too much time thinking about the Vietnam War and its impact on the histories of both the United States and Vietnam, but hearing automatic weapon fire in the place where thousands of soldiers fought and died brought me none of the joy or excitement that it seemingly did for my fellow tourists.

Next Chapter: A Rooftop in Saigon