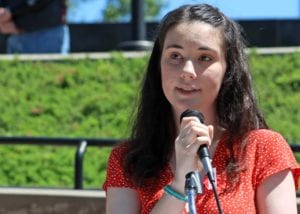 When pulling into the parking lot of the New Jersey Vietnam Veterans’ Memorial, my attention was first drawn to the Huey which had become, for me, a symbol of the Vietnam War. As a young musician, my first glimpse into unknown worlds is often through musical theater, and I first came to know the Huey through the musical “Miss Saigon.” While I appreciate how this helicopter safely transported troops in and out of dangerous places throughout the war and became a symbol of deliverance for its soldiers, the Huey has become, for many, a  symbol of loss, if not guilt, for the outcome of the war. In my AP United States History Class, we studied the Hugh Van Es photograph of a Huey leaving a USAID building rooftop in April 1975, an event of profound loss and disappointment, which was captured by the photograph and the musical. What I came to appreciate during my visit was that the Memorial does not shy from the controversy which I had learned marked the Vietnam War.

As I walked along the pathway and entered the tunnel to access the Memorial, I was reminded of another musical, “Hair.” In the movie version of “Hair,” Berger, a “hippie,” cuts his hair and enters an army barracks to temporarily, he thinks, take the place of Claude Bukowski to allow Bukowski to have a final visit with his new girlfriend, Sheila, before he leaves for Vietnam. However, Berger, not Bukowski, is whisked off to Vietnam in a cargo plane. Entering the tunnel reminded me of Berger, along with a seemingly unending line of soldiers, marching lockstep into the gaping darkness of a departing cargo plane. We do not see Berger in Vietnam after he enters the rear of that cargo plane, but we see, in the next and final scene of the movie, Bukowski, Sheila and friends at Berger’s grave-side in Arlington National Cemetery. When I walked through the tunnel and came to the center pavilion of the Memorial, I saw a circular round of panels with the names of the 1563 New Jersey men and one woman who had passed through their own tunnels which passageways had led to their deaths in the Vietnam War.

My first and most lasting impression of my visit to the Memorial was reading the names of the memorialized soldiers and seeing just how young they were when they died. I learned that the average age of a soldier serving in Vietnam was nineteen, compared to the average twenty-six year old who served in WWII, and that sixty-one percent of the soldiers who died in the Vietnam War were under the age of twenty-one. In seeing how young these men (and woman) were when they made their great and final sacrifice, and looking at myself in the reflection of the black granite panels, an eighteen year old on her way to college with an entire life in front of her, I began to wonder, regardless of the political and social backdrop of the war with which I though I was familiar, what would it have been like to be so young and placed in their situation?

Letters written by New Jersey soldiers displayed in the museum and educational center helped to give context and deeper meaning to the names on the Memorial. Most importantly, these letters suggest that these soldiers were very much like me, with all of my youthful hopes and expectations, but with the singular exception that these 1563 men and one female nurse were willing to risk everything for their country even if it meant their youthful hopes and dreams would never be realized. In his 1968 letter home, Lance Corporal John W. Ciallella, tells his Sea Girt family how he thinks of them, his friends and “how it used to be.” He also tells his family things will never be the same and how different it is to live “with  death so near.” I came to realize that, unlike Berger from “Hair,” whose death was an accidental sacrifice, Lance Corporal Ciallella marched headlong through his tunnel and into the war accepting its many risks. He tells his family in the post-script of his letter: “Whatever happens you will be proud of me.” Lance Corporal Ciallella insisted he would fight through any fear and perform his duty when he twice underlined the word “will” in his letter. I, too, want my family and friends to be proud of me, but I do not know if I would have had such will and courage with “death so near.” Lance Corporal Ciallella died on November 17, 1968, at the age of nineteen, having just graduated from Red Bank Catholic High School in 1967.

I believe I met a surviving older version of Lance Corporal Ciallella in the course of playing “Taps” at a memorial service as part of my work with Bugles Across America. In West Cape May. NJ, a deceased veteran is honored each day at sunset from Memorial Day to Labor Day on Sunset Beach. In the summer of 2017, I was requested to play live “Taps” when commemorating the service of a United States Coast Guard veteran who had long since died. I have been honored to fulfill thirty-five Bugles’ missions over the last two years. As I played Taps on my trumpet, a Vietnam veteran, wearing a hat which reflected his service, watched the ceremony, and I could see tears streaming down his cheeks. After I played, he approached me, held my hand and with a sweet smile and gentle eyes, expressed his gratitude for my playing. He was not a member of the honored veteran’s family whom I had met before the service and so, I concluded, he was given hope or encouragement by the simple gesture of respect extended by someone from my generation who recognized the sacrifices made by our military. It now occurs to me, having visited the Memorial and having begun to appreciate the war from a young soldier’s vantage point, that this veteran may not have felt supported at the time of his war and he may have seen in me a contemporary who supported his sacrifice as a young American soldier when that encouragement might not have been forthcoming. Whatever he might have been thinking or feeling, a mere twenty-four notes from a then sixteen year old girl made him feel supported and recognized.

While the Vietnam War may remain controversial and evoke disillusionment as depicted in our musicals and history books, the Memorial, and my Bugles experience, teaches me a simple truth beyond all that pain and loss: there forever remains an obligation to honor the service of each veteran who has served our country. I walked away from the Memorial believing that, like a well-played, simple and mournful rendition of “Taps,” Vietnam veterans, the families of fallen Vietnam veterans and even those citizens who may not have supported the war, would come away comforted by the Memorial’s simple elegance for it not only respectfully acknowledges the ultimate sacrifice of our New Jersey veterans, but the Memorial is also life-affirming. As a sure sign of irrepressible life, I saw deer hoof-prints in the snow as I walked on the tree shrouded pathway on the way to the Memorial. The Northern Red Oak tree in the center of the Memorial will give summer shade to the sculptures of three soldiers in the center courtyard. While there is one grievously wounded soldier prone and dying on the ground, he is being tended to by a caring nurse. Both these figures are overseen by an attentive on-guard soldier. This granite panel monument in the round, while in part reminiscent of traditional war memorials, is enlivened by our state tree at its center and by tree stands surrounding its exterior. The honored dead named on a single year’s daily count of granite slabs, names which come from all walks and races of life, seem to be witnesses looking down on the heroic actions of the surviving soldiers, likewise from various races and walks of life, in the center courtyard.

I have also come to appreciate the smaller details incorporated in the design of the Memorial that, for me, helped to elevate its overall meaning and our country’s coming to peace with the outcome of the war. Pointing the panel for May 7th, the day upon which the Vietnam war ended in 1975, towards Vietnam and paying homage, via a separate memorial at the front of the complex to those Vietnamese people who persevered in the face of the horrors of war, also distinguishes the Memorial from other traditional war monuments. I have been to the National Mall and have visited various monuments to the veterans of our wars, but I have not encountered a memorial, like New Jersey’s Vietnam Veterans’ Memorial complex, which rightfully incorporates the struggles of the civilian population where the war was fought. The orientation of the May 7th panel towards Vietnam was the inspiration of the Memorial’s architect, Hien Nguyen, who himself was from South Vietnam and able to escape a few days before the fall of Saigon. Considering the outcome of the war and particularly the feelings of abandonment felt by the South Vietnamese, I find it extremely important to observe that Nguyen, who experienced the war and its aftermath firsthand, was moved to honor those who had served and died. The Memorial is truly life-affirming by virtue of its inclusiveness.

Finally, in addition to honoring the American and Vietnamese dead and celebrating those who served and survived, for me the Memorial presents a personal challenge. I am not going to be a war hero like nineteen year old John Ciallella. However, I should still be bound by the same promise he made to his family, community and country: “Whatever happens you will be proud of me.” On the New Jersey Gold Star Family 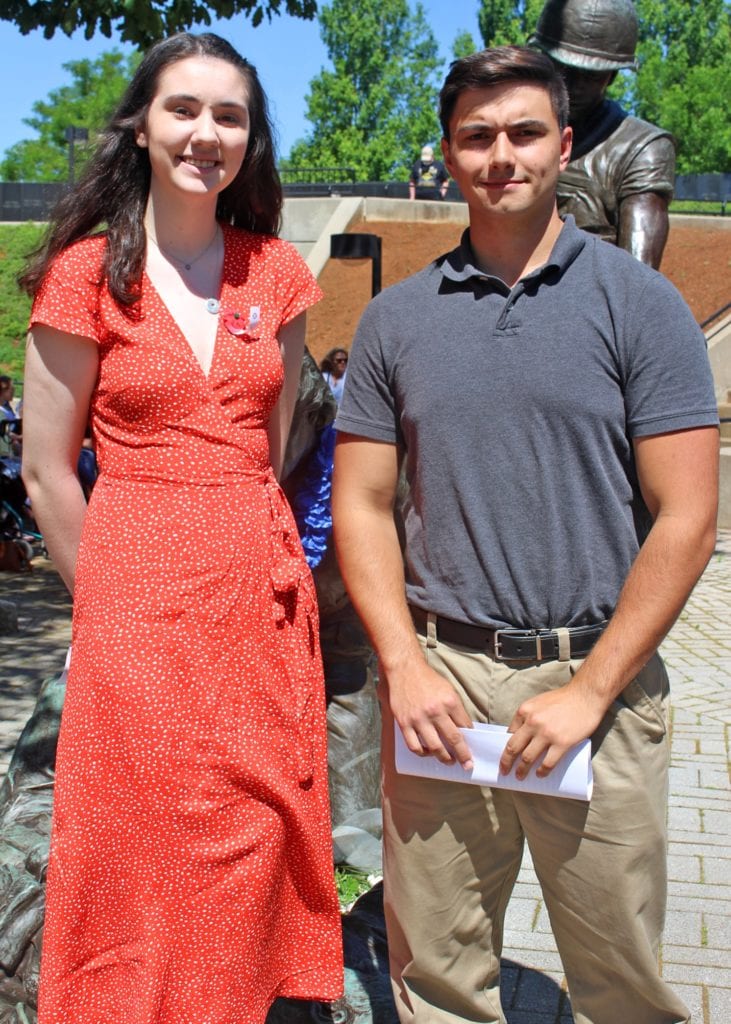 Monument near the entrance of the  museum and education center there is depicted a quote, a copy of which was kept in the pocket of Eleanor Roosevelt during WWII, which reads, in part: “…As long as there must be a war, I then must Ask and answer, Am I worth dying for?” When I look into the Memorial’s granite mirror bearing the names of New Jersey veterans who died in this war, and realize that I am, like every citizen of this country, the beneficiary of veteran sacrifice, I am compelled to ask myself whether I am living a life worth dying for. My hope for all of us is that we will earn the lives these great young soldiers gave to us and that we will make John Ciallela, and his fellow fallen New Jersey veterans, proud of the lives we lead.

Meghan is the recipient of one of two $2,500 scholarships awarded by the New Jersey Vietnam Veterans’ Memorial Foundation to further her education at Duke University. She will be reading her winning essay during the May 27th Memorial Day Ceremony at the Memorial.

For more information about our Scholarship Program, please email the Scholarship Committee at scholarship@njvvmf.org or visit https://www.njvvmf.org/college-scholarships/.