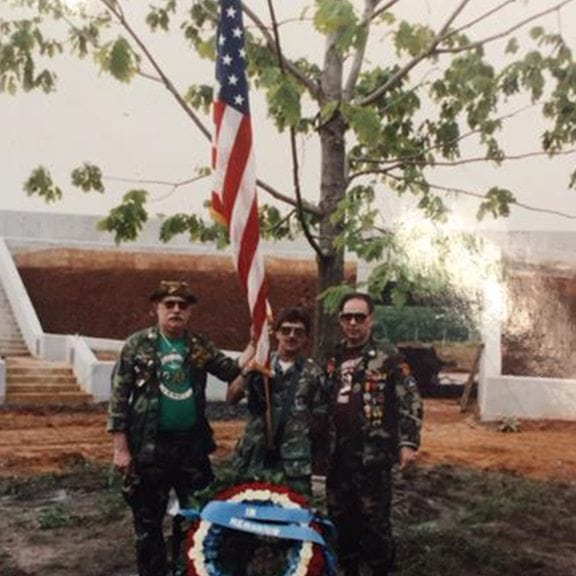 They wanted to build a monument to the brothers and sisters who gave the supreme sacrifice, enabling us all to enjoy their precious gift of freedom. They wanted to honor their fallen comrades and those who suffered because of the Vietnam War. They wanted those who died to never be forgotten and always be honored. They succeeded.
The Last Patrol, a group of New Jersey Vietnam veterans who walked from the nation’s capital to the site of the New Jersey Vietnam Veterans’ Memorial in Holmdel to raise awareness, support, and funds for the monument, did just what they set out to do in May of 1989. The memorial, still going strong today, soon became a symbol of the sacrifice given for freedom during the Vietnam War.
Fourteen years after the end of the war in Vietnam and several years after the creation of the Vietnam Veterans’ Memorial in Washington, D.C., the state of New Jersey finally had a fitting monument for the men and women who lost their lives in Southeast Asia.
The memorial, located on the grounds of the PNCBank Arts Center, was designed by Hien Nguyen of Marlboro, New Jersey. Nguyen, an architect, is a former South Vietnamese citizen forced to flee his country with his mother and sister after the communist takeover in 1975. His family fought at the side of American troops during the entire length of the Vietnam War. The scale model of the New Jersey Vietnam Veterans’ Memorial was toured around the state at a variety of public events and veteran’s functions.

The memorial is constructed on a 5.5-acre site near the PNC Bank Arts Center. Three statues, one representing servicemen who died in Vietnam, one for those who survived, and one for the women who served in the war, lay under a red oak tree which represents the Garden State. Inside the perimeter there are 366 black granite panels, one for each day of the year. The names of each soldier, marine, sailor or airman killed or reported missing in action are engraved upon the appropriate panel.
The circular pavilion allows visitors to embrace all the names at once and provides the sense of privacy and serenity appropriate to a memorial to the fallen veterans.
The New Jersey Vietnam Veterans’ Memorial Foundation will honor The Last Patrol and the 20th Anniversary of the Vietnam Veterans’ Memorial with a ceremony. The event will be May 7 from 11a.m. to 1 p.m. at the Memorial and will celebrate New Jersey Vietnam Veterans’ Remembrance Day, established in 1991 as a unique day in New Jersey to honor all those who served in the military during the Vietnam Era. 2015 also marks the 40th anniversary of the end of the Vietnam War.
The New Jersey Vietnam Veterans’ Memorial Foundation offers a meaningful and engaging experience that recognizes the sacrifices, courage and valor of Vietnam veterans and that encourages and fosters a thorough understanding of the Vietnam era including the political, historical, social, cultural and military aspects which affected the United States, and especially New Jersey. 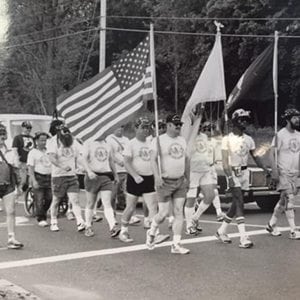 Remembering the Fallen, Preserving The Memory 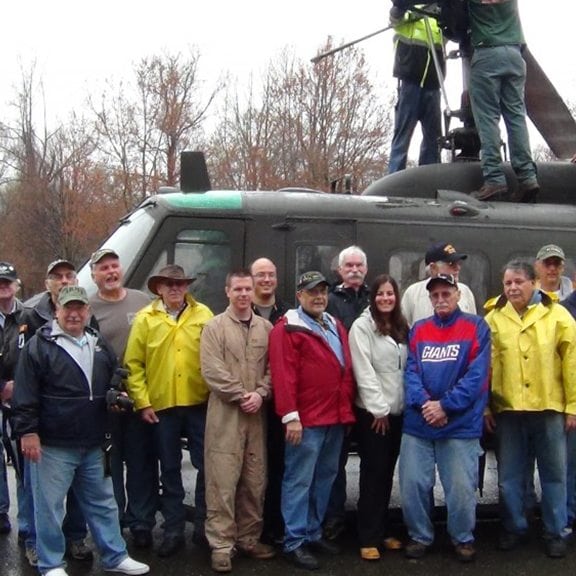 We waited, anxiously. We were the beginning of the Hangar Crew. Where is she? The N.J. National Guard called. “We are turning on to Hurley Pond Road”. We raced out to meet her, UH-1D 64-13732.

We Vietnam vets gathered around in quiet awe. Ken and I, Huey pilots in Nam, hugged and cried.

Our job? We would turn this rusted hunk of metal, broken windshields, and missing parts into a restored icon. She was flown by the Hornets at Cu Chi. Appropriately, after twenty years in a Fort Dix field she was delivered with dozens of hornet nests.  She would be proudly mounted at the New Jersey Vietnam Memorial.

Something was happening to us; a deep feeling, beyond brotherhood and bonding. What was it? There must be a word.

We gathered every Monday morning for fourteen months. Our leaders emerged. Guys seemed to know how to get involved. Bob, Bill and Gary became the chief mechanics.  Ken, nicknamed our Head Rusty Nut, made coffee and efficiently supervised. Frank became the scheduler. Cappy enlisted his daughter Kelly (Picassa) to be our head painter. Eli, Mike and Mike, Jim and Jim, John, Tom, Dan, Ralph, Pat and Dick all chipped in.  I with my clipboard and camera and Doc with his broom went about doing our thing. Iraqi vet Craig and Afghan vet Billy the Kid joined up.

We ordered “Huey Restoration Crew” t-shirts. We all signed the inside of the tail cone. Lunch at Mulligan`s became a routine, with laughs, hugs, insults, and pats on the back.

Needed parts magically showed up. No contractor or supplier said no to our requests.  Strangers stopped at the hangar.

Our project was almost finished. We shared mixed emotions of pride in a job well done and some sorrow that the job was done.

On May 7, 2014 our Huey was dedicated at the New Jersey Vietnam Memorial. She was awesome on her mounting before more than a thousand people. And then, the surprise: whirr, whirr, whop, whop, whop, whine, whop, whop, whop. Yup, it was our Huey with recorded sound.  Cheers, tears, hugs, and joy among vets, families and friends.

Oh yeah, the word, it`s CAMARADERIE: trust, solidarity, love, close friendship, amity, peaceful harmony. We have one another and for three hours every Monday nothing else seems to matter.

Note: Carl’s story is now in a national Veterans’ literature competition. You can follow the story here 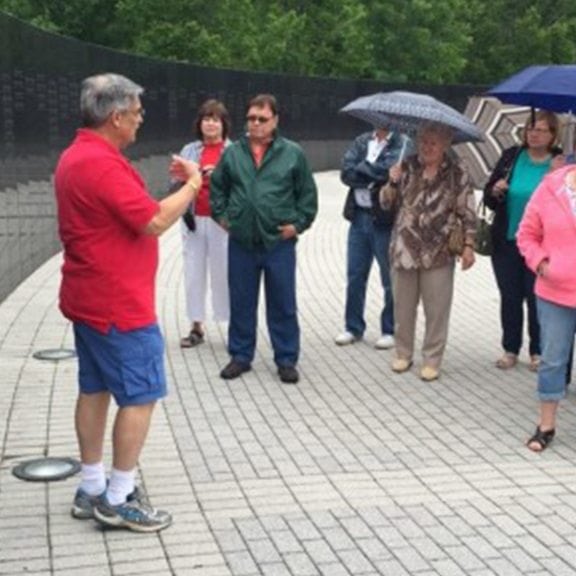 The former Vietnam War helicopter pilot was in his element. Mingling with the crowd, showing off his photo albums, and proudly introducing people to his grandkids. It was his day, and it showed.

Carl Burns spent one year in the Cu Chi region of Vietnam as part of the 25th Infantry Division. These days he spends his time volunteering at the New Jersey Vietnam Veterans Memorial Foundation. (Among a slew of other things, like being an adjunct professor at Rutgers University, Vice President of recruitment for the Rutgers Oral History Archives, and part of the Rutgers Alumni Association Board of Directors.)

On Saturday, June 27, Carl hosted a friends and family day at the memorial, inviting those closest to him to take a tour of the facility and grounds, but most importantly sharing in the memories of a very important year of Carl’s life. The tour was a way for those friends and family to get a glimpse inside what it was like for the soldiers serving in Vietnam.

The tour was extra special that day — National PTSD Awareness Day. Carl talked to the audience about Post Traumatic Stress Disorder and the importance of support for those suffering. And he knows exactly how important it is to find help.

Carl was an integral part of the restoration of a Bell-UH-1D helicopter (“Huey”), now on display at the New Jersey Vietnam Veterans Memorial. Naturally, and that was the first stop on the tour.

The Huey hovers over the foundation building, a massive symbol of the important role those who flew them during Vietnam served. The primary role of the helicopters and their pilots during the war was to pick up the injured and quickly get them to medical care. And it’s due to these pieces of machinery and their pilots and crews that the survival rate in Vietnam was more than ten times that of the Korean War. The magnitude of this fact left the crowd of more than 30 people silent. And when the Huey noise was turned on, the crowd could picture what it must have been like to be in the pilot seat of a Huey.

The tour of the grounds of the New Jersey Vietnam Veterans Memorial allows visitors to do three things: interpret the memorial in their own way; remember, heal, and honor; and have any questions answered. And these things are done in a very personalized way, lead by tour guides who take pride in what they do. It’s evident that this is a way for them to keep remembering, healing, and honoring.

Back in the foundation building, Carl showed a DVD of photos from his time in Vietnam and told stories of his more dramatic times in the country. Like the time his helicopter, Pancho Villa, got shot down over a rice paddy and hit the dyke on the way down, bouncing several times before coming to rest. Carl lived to tell the tale, and tell it well.

Want to hear more stories about the Vietnam War era? Free, guided tours of the memorial are offered the first Saturday of each month at 11 a.m. and 1 p.m. Tours are also available by request by visiting the website, or calling 732-335-0033.

If you or someone you know wishes to seek treatment for PTSD, visit www.ptsd.va.gov, email PTSDconsult@va.gov, or call 866-948-7880.